Shortly after we finished benchmarking the RocketRAID 1820A, Highpoint released a new driver promising performance improvements over the version 1.12 driver we used in our tests. Because a complete redo of the benchmarks would demand too much time, the tests were only repeated for RAID 5 with eight disks. The tests with the 1.13 driver show an average performance improvement of 4.5 percent over the 1.12 driver. The improved results in RAID 5 with eight disks have already been displayed in the tables and graphs on the previous pages. The results in other RAID levels can be raised with an imaginary 4.5 percent. The new driver brings no change in our judgement about the performance level of the RocketRAID 1820A. The RocketRAID is a good performer, but it fails to reach the performance levels of the Areca ARC-1120. Meanwhile, driver version 1.13 has been succeeded by version 1.14 which has no has no modifications concerning performance according to the changelog. 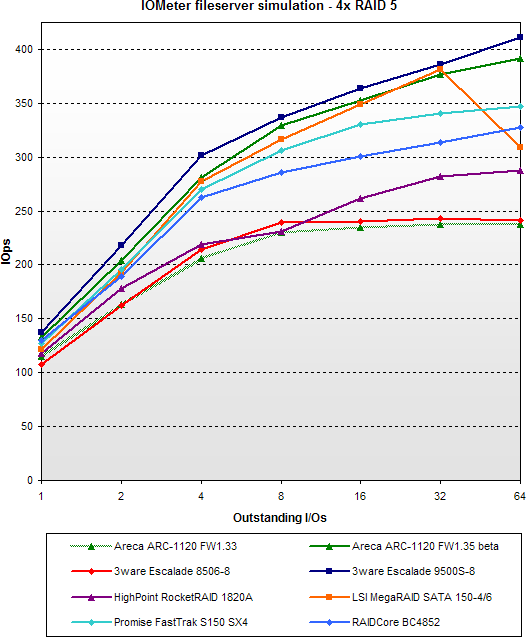 The considerable improvements of the I/O performance have not been restricted to synthetic benchmarks such as the IOMeter fileserver simulation. The performance in our workload simulations also show considerable progress. Unfortunately, our good mood is spoiled a bit by slightly decreased RAID 10 performance in the Desktop and Workstation StorageMark 2004 index. On the other hand, the RAID 5 performance shows an strong increase of 17.8 and 15.6 percent in the desktop and workstation index, and those workloads only have rather short I/O queues. In the tables below, we have only included the performing alternatives to the Areca ARC-1120. The RAID 5 performance of the Areca ARC-1120 with the 1.33 firmware was already very high, now it's entirely in a class of its own.

The new firmware puts faster response times on the leader board in the Server StorageMark 2004, both in RAID 5 and RAID 10. RAID 5 performance gains 15.0 percent while the improvement in RAID 10 is 3.0 percent on average. The Areca is way ahead of the competition in RAID 5.

The performance improvements in the individual tests of the server suite vary from a small loss to considerable improvements of more than 30 percent. The performance in RAID 10 is not always better. In eight of the fifteen tests the new firmware is faster, in two tests it performed exactly the same. In RAID 5 the new firmware was faster in eleven of the tests and in one test the result was equal. To credit Areca; the progress is especially made in scenarios where the Areca ARC-1120 was moderate at first. In the high concurrency disk-to-disk backup scenario the Areca lost a bit of its firm first position in RAID 10, and thanks to the new firmware it took control in RAID 5.

A very strong improvement in RAID 5 performance is booked in the fileserver medium filesize benchmark. The Areca ARC-1120 delivers a striking advantage of 41 percent over the second best adapter in the RAID 5 tests, the RAIDCore BC4852. The RAID 10 performance remained roughly equal to the old firmware.

A small improvement is also seen for the RAID 10 performance in the MySQL data drive scenario. The huge difference with the frontrunner in the RAID 10 comparison remains unchanged. Luckiley, the RAID 5 performance shows considerable progress and is now at championship level. In RAID 5, the new firmware performs even better than in RAID 10. When comparing the ARC-1120's RAID 5 performance to the fastest RAID 10 adapter, the ARC-1120 doesn't do bad.

Even with the new firmware, the Areca ARC-1120 still falls behind the competition in some of the RAID 10 comparisons. With respect to RAID 5, without doubt the most important RAID level, the Areca adapters no longer have weak points. In the rare scenarios where the ARC-1120 only achieved moderate performance with the old firmware, the ARC-1120 now belongs to the top performers. We will soon test the 16-port Areca ARC-1160 with a new version of the 1.35 firmware, which will include improvements to the RAID 10 performance.