We start our tour through the benchmark results with a discussion of the low-level performance characteristics of the adapters. Examples of low-level tests are the average access time, the sequential media transfer rate, the cache transfer rate and the random I/O performance. These tests do not provide a complete picture of the performance of the RAID adapters in real world applications, but they are useful to explain the performance differences in our workload simulations, which will discussed on the next pages.

The Winbench 99 v2.0 Disk Inspection Test was used to measure the average access times. Because of the minimal differences between the adapters, the results are displayed in table format. The 3ware adapters and the RAIDCore BC4852 consequently belonged to the group of controllers with the lowest average access time, whereas the LSI MegaRAID SATA 150-4/6 are without any doubt the slowest solutions in this particular test. The out-of-date architecture of the MegaRAID SATA 150-4/6 is evident in higher latencies. In the RAID 5 tests, the 3ware Escalade 9500S-8 scores a green colour four times. The Areca ARC-1120 with its modern RAID implementation belonged to the middle of the pack. We weren't suprised that intelligent RAID adapters had higher latencies then hostbased RAID adapters such as the RAIDCore BC4852, where the SATA controller can interact directly with the system. On the Areca ARC-1120, the signal moves through extra components like the I/O processor and local PCI-bridge to reach the SATA-controller on the PCB of the RAID adapter. The communication between the RAID ASIC and the ATA controllers on the 3ware Escalade 9500S-8 is excellent, however. The presence of a Marvell PATA to SATA bridge does not seem to affect latencies.


Flaunting with high sequential transfer rates (STRs) is a popular activity amongst owners of large RAID arrays. On our forum, whole topics are dedicated to showing STR benchmarks. In this roundup of SATA RAID adapters, sequential transfer rates are especially useful for researching the scaling capabilities of the RAID adapters in the test. Ideally, the STR should increase linearly with the number of disks used. In the real world, STR scaling is rarely perfect because the performance is limited by all kinds of bottlenecks in the system bus, the CPU and the I/O processor.

In RAID 0 with two or four disks, the RAIDCore BC4852 puts the highest transfer rates on the scoreboard. Its RAID 0 transfer rate at the beginning of the disk cannot be equalled by any of its competitors. At the end of the disk, the differences where minimal: the RAIDCore BC4852, 3ware Escalade 8506-8 and Promise FastTrak S150 SX4 performed nearly the same. It is striking to see that the FastTrak S150 SX4 could not reach optimal transfer rates in a single disk configuration. In the RAID 0 configuration with four disks, the LSI MegaRAID SATA 150-5/6 and the HighPoint RocketRAID 1820A didn't come close to the theoretically possible transfer rates. 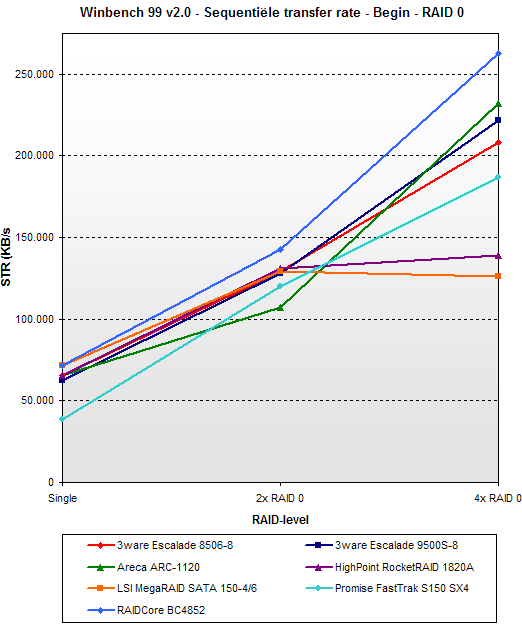 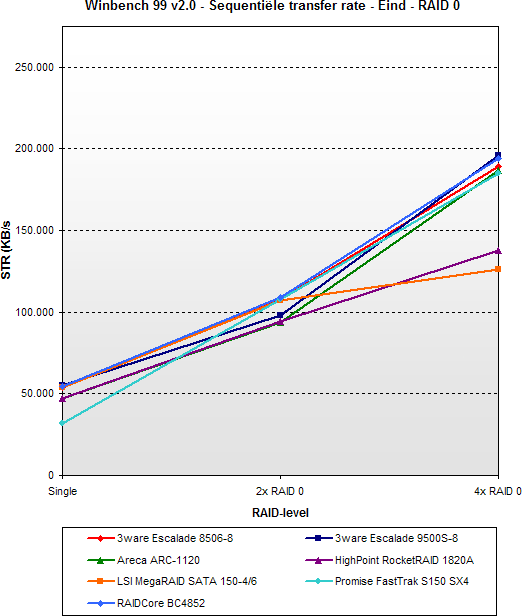 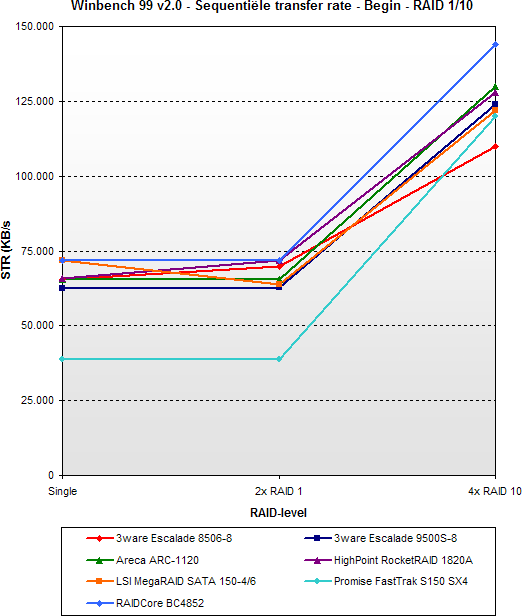 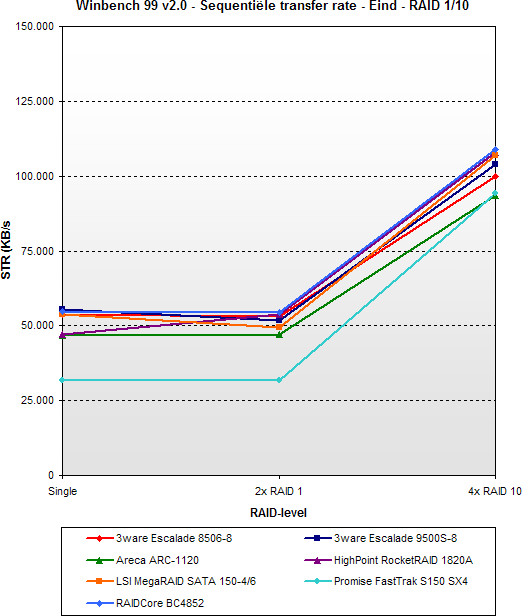 Things get interesting when we look at the RAID 5 tests. The adapters with six and eight ports now get the chance to show very high transfer rates. In theory (8 - 1) * 70MB/s is possible, but not all adapters reach the optimal transfer rate of 490MB/s. The RAIDCore BC4852 gets very close and also the HighPoint RocketRAID 1820A was not far from optimal results. A good performance was also scored by the Areca ARC-1120 and - to a lesser degree - the 3ware Escalade 9500S-8. The 3ware Escalade 8506-8 and the LSI MegaRAID SATA 150-5/6 scored poor transfer rates. The Promise FastTrak S150 SX4 escaped criticism because it only had four ports, so it couldn't reach very high transfer rates. 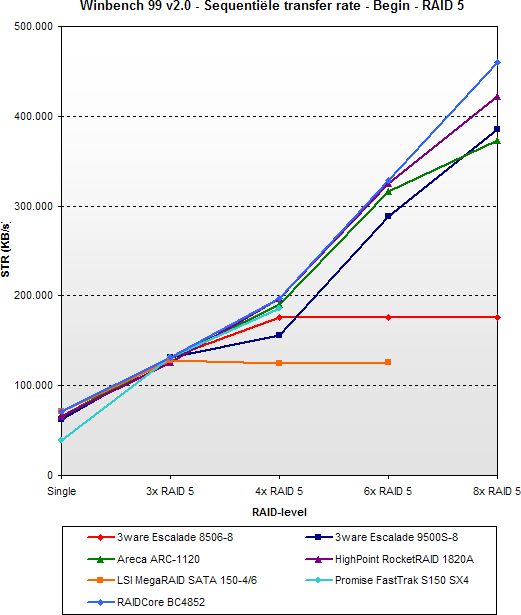 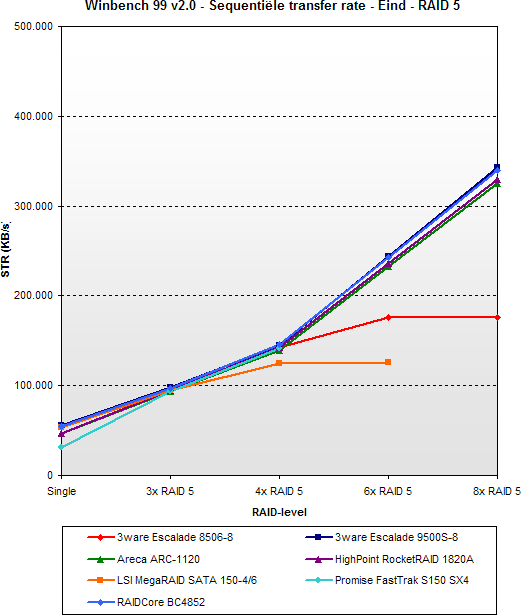