For the database server simulation we resort to the Tweakers.net and Gathering of Tweakers (forum) databases. The Tweakers.net environment was transferred to our simulation server running MySQL 4.0 on Windows Server 2003 and PHP/Apache on the Windows clients. Surely MySQL will be considered inmature, and therefore unsuitable to reproduce a database disk usage scenario, by some people. The fact is that MySQL has been supporting enterprise features like transactions and replication for many years now. The MySQL database server is very well suited for certain applications, web databases being one example. Moreover, the ultimate goal of this operation is to record typical database I/O. The access patterns, generated by the different database server applications, will be roughly similar at equal workloads. More important is the specific composition of the database and its workload.

The Tweakers.net and GoT databases are quite large, with a dataset of 40GB. The queries mostly existed out of SELECT statements, but also many inserts and updates are issued to log visitor statistics, post comments, add or update prices in the Pricewatch, etcetera. Logs and data were seperated into two storage arrays, one RAID 1 log array and a 73GB RAID 5 data array. The 'MySQL data drive' scenario that we will be discussing here, is a playback of the traces from the data array. Due to the separation of logs and data there are considerably less write operations compared to a situation with logs and arrays stored on a single array. Tracing was started with a full Windows disk cache on the simulation server and a full query, index and data caches on the database server. 84 per cent of data transfers existed out of read operations. The average queue length was 12 oustanding I/Os with peaks reaching up to 50 I/Os. Would the activity on the logs have taken place on the data-array, approximately 64 per cent of the operations would be read operations.

The performance leadership in the RAID 1 and RAID 10 comparison is held by the two 3ware adapters. The Areca ARC-1120 clearly doesn't know how to handle the specific access pattern of the database scenario, and finishes dead last. The disappointing random I/O performance had already been adressed by Areca. The issues have been fixed in a new beta firmware, which was released after our benchmarking was done. 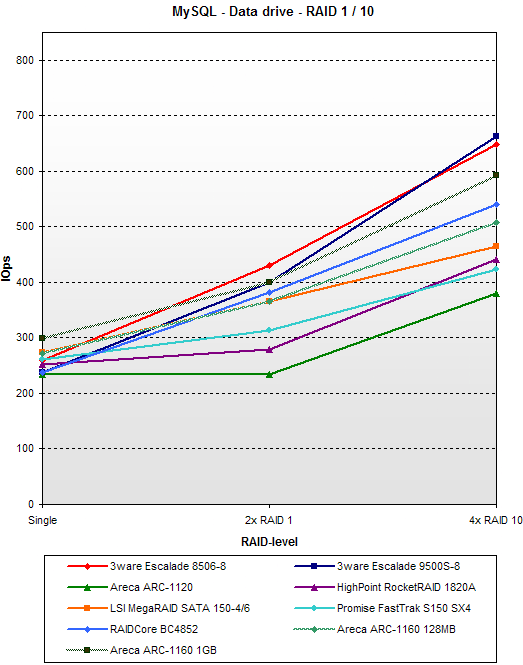 Thanks to the restricted number of write operations the 3ware Escalade 9500S-8 excels in the RAID 5 test. The best performance scaling was achieved by the RAIDCore BC4852. With eight disks in RAID 5 this adapter is approximately 2.75 times faster than a single drive. The LSI MegaRAID SATA 150-4/6 and the HighPoint RocketRAID 1820A are in the middle of the pack. Moderate to bad performance were provided by the 3ware Escalade 8506-8, the Promise FastTrak S150 SX4 and the Areca ARC-1120. 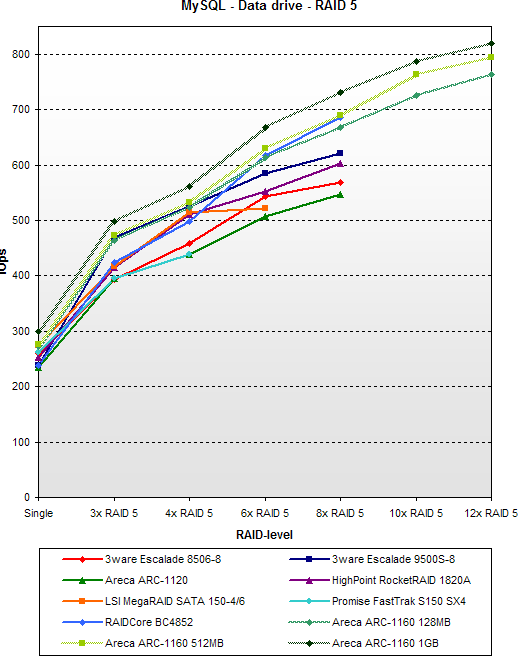 The second database scenario is a dump of a running database. In this scenario, data, logs and dumps were stored on a single disk array. The server was given time to acclimatize to the workload, so it could work with realistically filled buffers. Due to the activity from the database dump and the log files, the percentage of read I/Os was reduced to 57 per cent. The average queue length remained nearly identical. The MySQL Dump scenario occurs when database backups are created during regular (daytime) workloads. High performance RAID arrays ensure that no performance degradation is noticed by the database server users.

In the previous tests, the LSI MegaRAID SATA 150-4 and the Promise FastTrak S150 SX4 didn't turn out to be racing devils. In this particular scenario, both adapters are performing very well, at least in the RAID 1 and the RAID 10 benchmarks. The performance of the other contenders in our comparsion did't deviate that much from each other. The HighPoint RocketRAID 1820A is the only product which falls behind somewhat. 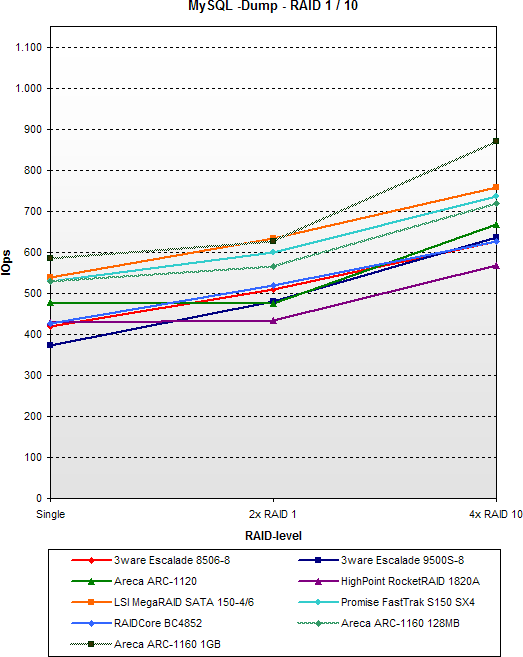 The results of the RAID 5 test are again a honary mention on the MegaRAID's track record. The RAIDCore BC4852 and the RocketRAID 1820A deliver excellent performance. The Areca ARC-1120 performs moderately and the 3ware adapters are just slow us usual in RAID 5. 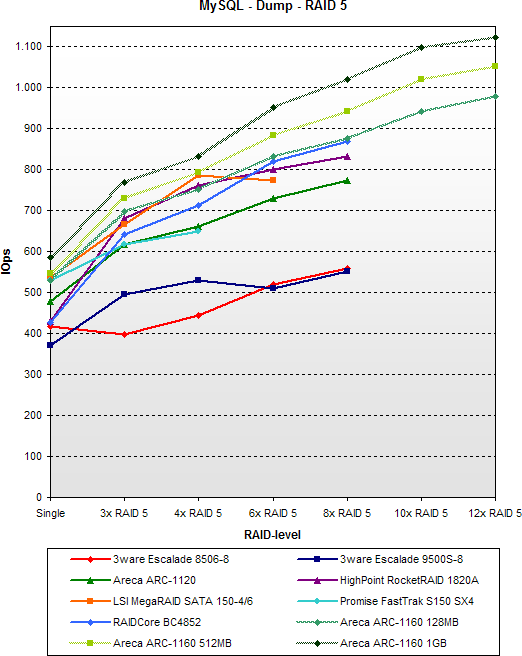