The first RAID adapters of newcomer RAIDCore where put on the market in late 2003. Thanks to a positive review on Tom's Hardware Guide, the RAIDCore products received the attention from the thousands of tweakers and hardware addicts. RAIDCore was founded in 2000 by a group of former Adaptec employees. The company concentrates entirely on the development of RAID storage products. RAIDCore's Fulcrum architecture is the base of these products, a flexible RAID architecture which is independent of operating system, I/O bus and hardware platform. RAIDCore has deliberately chosen for a hostbased solution. An important difference with hostbased RAID adapters from other manufacturers, is the rich featureset of the RAIDCore Fulcrum architecture. The featureset is on the same level as the RAID implementations of established manufacturers such as LSI Logic and ICP Vortex. Impressed by the abilities of RAIDCore's engineers, network giant Broadcom decided to acquire RAIDCore in the spring of 2004. 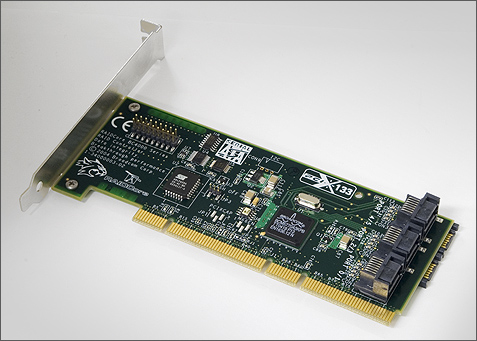 Unfortunately, the short history of RAIDCore already has some black pages. The first product of the firm, the RC4000 series, suffered a hardware failure, which forced RAIDCore to organize a large scale replacement program. The failure caused errors leading to drives dropping out of the array during the (re)boot procedure. According to RAIDcore, the SATA controllers manufactured by Marvell were to blame. Halfway 2004 RAIDCore introduced a new series of SATA controllers, name BC4000, in which the 4- and 8-port Marvell SATA controllers were replaced with Broadcom controllers. The transistion to the BC4000 series was a perfect example of how easily the Fulcrum architecture can be adapted to different hardware platforms. For this comparison, RAID supplier WebConneXXion supplied an 8-port BC4852. Together with its 4-port cousin (BC4452), the BC4852 is forming RAIDCore's current product range.

Although the Fulcrum architecture includes support for external XOR and DMA acceleration, the BC4000-series leaves this feature unused. The PCB includes no more components than required for a basic Serial ATA adapter without RAID functionality. Parity calculation is handled by the CPU. A Broadcom BCM5770 is in control over a maximum of eight hard disks. The BCM5770 SATA controller supports 133MHz PCI-X but unfortunately misses all the nice features of the SATA II specification. Thanks to its lean hardware implementation, the BC4852 PCB could be easily molded in low profile format. The RAIDCore BC4852, Areca ARC-1120 and HighPoint RocketRAID 1820A are the only adapters in this roundup suitable for use in low profile systems.

As said before, the featureset of the Fulcrum architecture is very complete and supports, among other things, RAID 50, online capacity expansion, online RAID level migration and distributed hot-spares. The hardware-independent nature of the Fulcrum architecture made it relatively easy to implement support for controller teaming. In its current state, the software stack supports up to four controllers, thereby enabling RAID configurations consisting of a maximum of 32 hard drives. A handy feature is the possibility to divide the capacity of a hard disk over several arrays. With the majority of RAID-adapters, the capacity of a disk can only be assigned to one array. No cache is available on the adapter but the software stack solves this by using system RAM. RAIDCore has developed a self-tuning cache design, which dynamically assigns cache memory based upon available system memory, and optimises cache strategies based on I/O profiles. 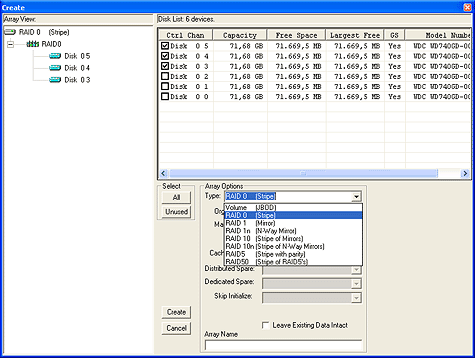 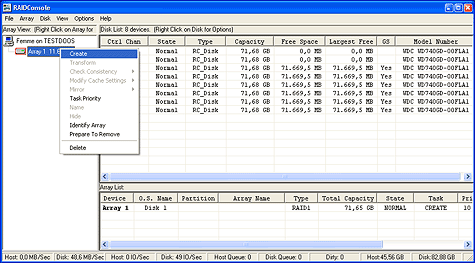 At present, the driver support for the BC4000 series is restricted to Red Hat Linux 9.0, Red Hat Advanced server 3.0, Fedora Core 1 and Windows-versions 2000, XP and 2003 server. Considering the fact that all RAID intelligence is consolidated in the driver, it is unlikely that the source code for the Linux-drivers will ever be released. For Windows-users RAIDcore provides a pleasant management tool. Configuring arrays on the BC4852 is very easy, mainly because there is no possibility to tune arrays manually. RAIDCore uses the philosophy that the user must not be bothered with difficult concepts like stripe-size and cache strategy, settings which have an unpredictable impact on performance. To offer good performance RAIDCore has developed an automatic tuning system. The results of the benchmarks on the coming pages makes the impression that RAIDCore has succeeded at that. The price of the 8-port version adds up to 420 euro. Based on that price tag, the RAIDCore BC4852 fits in between the more expensive intelligent RAID adapters and more affordable hostbased RAID-adapters.