Last year, Tweakers.net put a lot of energy in the development of an extensive and representative set of server benchmarks. Several server applications were simulated on a dual Opteron 244 running Windows Server 2003 (Intel IPEAK SPT only runs on Windows sytems). The server was equipped with 8GB of memory and a SCSI RAID setup configured with two 10K hard drives and six 15K hard drives. The ultimate goal was to trace disk access patterns from various server scenarios. The server StorageMark 2004 Index consists of traces from disk-to-disk backup servers, file servers, database servers, streaming media servers and mail servers. Further information is found on

In RAID 5, the Areca ARC-1120 generally offers the highest server performance. The RAIDCore BC4852 also provides good results. The midfield is occupied by the LSI MegaRAID SATA 150-4/6 and the HighPoint RocketRAID 1820A. In RAID 5 configurations consisting of three and four drives, the LSI Logic and HighPoitn adapters performance nearly identical to the RAIDCore BC4852. With six and eight disks, performances does not improve a lot, however. The products manufactured by 3ware and Promise occupy similar disappointing positions as seen previously seen in the RAID 5 desktop benchmarks. The Escalade 8506-8 fails to improve over the performance of a single disk while the Escalade 9500S-8 is only slightly faster than one Raptor WD740GD. 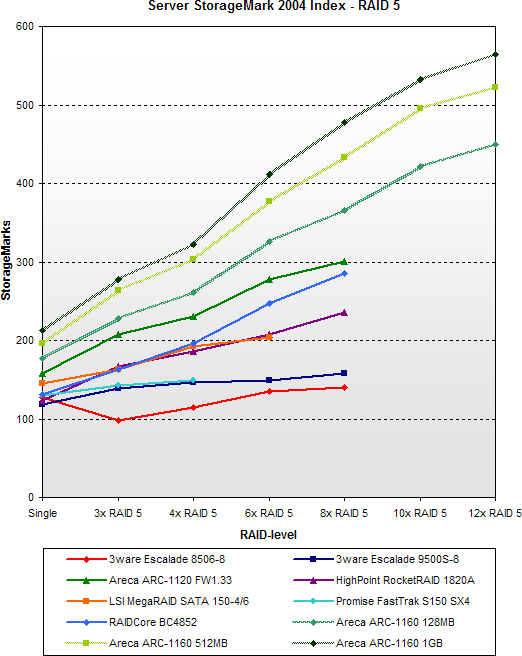 A selection of the tests from the server suite will be discusses individually on the next pages. The stripe size used by the adapters was tweaked for optimal performance in the server index, and therefore was not optimized for each individual test. It would be too time consuming to run the tests with all possible stripe size settings for each RAID level. In some cases, multiple tests for a certain RAID configuration were run (to examine which stripe size or cache setting wouold deliver the best performance in the server index). In that case we will display the best result for the invidual tests. This could be result which set at a different setting than the configuration delivering the highest index score.

The first test is a scenario simulating a high concurrency disk-to-disk backup server. The use of disk arrays for backup storage is increasing day by day. Disk storage is frequently combined with tape storage to create tiered storage systems: first data is written to a backup array and at a later time the backup is copied to tape. The advantage is a smaller backup window, lower loads on the backup clients, and faster data transfer to tape drives. Because of their low price per gigabyte, Serial ATA hard drives are ideally suited for use in backup servers. Coupled with a high performance RAID adapter, Serial ATA hard drives can offer high performance and excellent reliability.

The high concurrency version of the backup server simulation is a scenario in which seven clients are writing backup data to the server using two gigabit ethernet connections. During the trace, the simulation server reached network transfer rates of 70MB/s. A total amount of 43GB of data was written to the backup server. The performance of the write-back cache has a large effect on performance, as well as the capacity to handle large I/O queues. On average 30 I/Os where waiting to be processed by the RAID adapter. 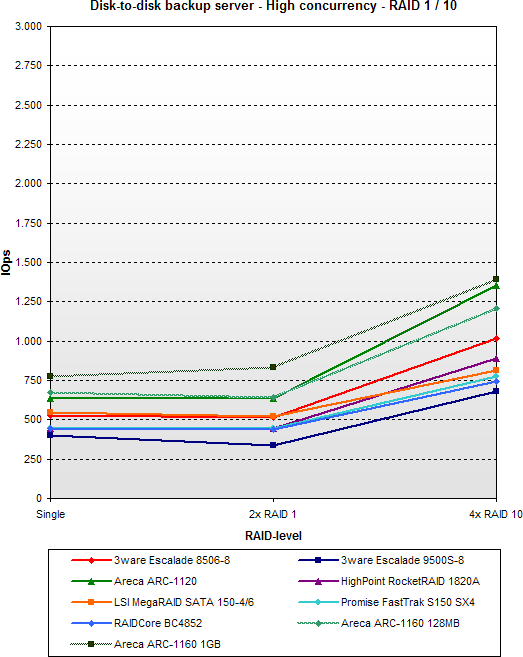 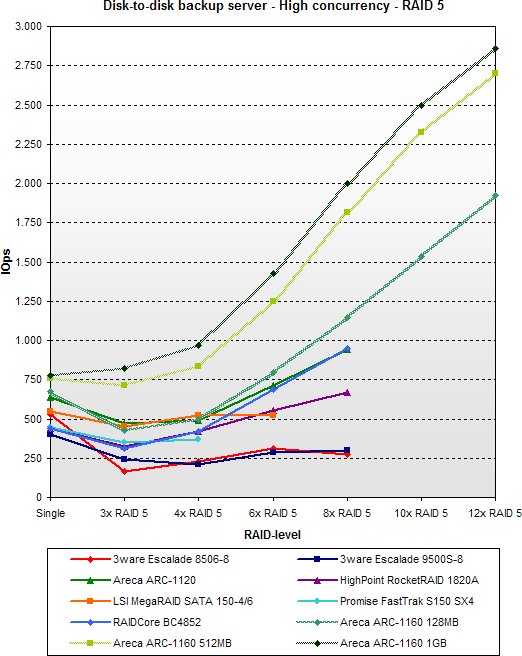