Serial ATA has been common technology in desktops and workstations for quite some time now. Market share in server environments has been growing steadily over the last couple of years. The interest for Serial ATA is certainly there. The server market is very conservative by nature, however. Many businesses still prefer SCSI for mission critical appliations. Reliability and availability are top priority. Serial ATA still has a long road ahead in winning the trust of corporate users. There are many true and false stories circling around about the performance of SCSI systems in server workloads. On this page, we will make a direct comparison between SCSI and SATA RAID.

We have no intention to pass sound judgements about the reliability of the Serial ATA solutions reviewed in this article. However, based on the features of the adapters in this test we can say that SATA RAID need not be inferior compared to alternatives using a SCSI interface. The high-end SATA RAID adapters are supporting all the important availability features found on SCSI RAID-adapters. The SATA RAID-adapters made by Areca and LSI Logic have been directly ported from architectures which have been used in SCSI RAID systems for many years. So with respect to features, Serial ATA is certainly up to the job of handling enterprise storage.

That leaves the question if Serial ATA can offer acceptable performance in workstation and server environments. Thanks to the large number of RAID adapters which have been tested by Tweakers.net in the previous months, we can certainly say something meaningful about the performance of SATA and SCSI RAID systems. Besides performance, price and rack density are important selling points that need to be taken into consideration. Does one give priority to the highest performance or the lowest price/capacity, or is performance and capacity per height unit important? These different priorities leave us with several possible interpretations of the results you find on this page. For example, a SATA RAID setup using six 10.000rpm hard drives can be cheaper and better performing than a SCSI RAID setup, whereas SCSI setups with 15K hard disks will realize a higher performance per height unit. No discussion is needed about the answer to the question which configuration provides the lowest price per gigabyte. Serial ATA will always have the advantage in this area. 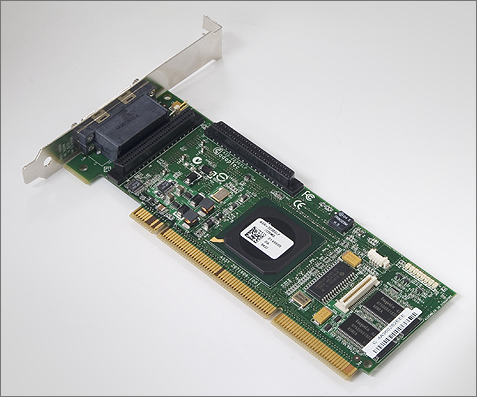 Adaptec 2230SLP
For the comparison of SATA and SCSI RAID performance we used six 18GB Maxtor Atlas 15K hard drives coupled with the latest dual channel SCSI RAID-adapters from Adaptec and LSI Logic. These adapters are the Adaptec 2230SLP and the LSI MegaRAID SCSI 320-2X. The 2230SLP is a new RAID-on-Chip design from Adaptec, which integrates the SCSI controller and I/O processor on a single chip. The 2230SLP has been available on the market for only a short time. LSI Logic brought its MegaRAID 320-2X to the market during the winter of 2004. The MegaRAID SCSI 320-2X was the first SCSI RAID card using the new generation of Intel XScale I/O processors. The adapter is based on the 400MHz IOP321, a predecessor of the 500MHz IOP331 fitted on the Areca ARC-1120. In the comparison we have also included an older generation Ultra160 SCSI adapter. The LSI MegaRAID elite 1600 is equipped with a 100MHz i960RN processor and offers two Ultra160 SCSI channels. The MegaRAID SCSI 320-2X was tested with 128MB and 512MB cache while the MegaRAID elite 1600 was equipped with 128MB cache. 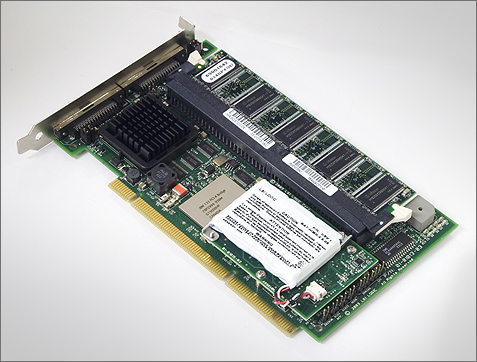 LSI MegaRAID SCSI 320-2X
Due to circumstances, we had to use a testbed different to the one used for the SATA RAID benchmarks. The Adaptec 2230SLP and the MegaRAID cards with 128MB were tested on an Intel E7525 system equipped with two Xeon 3,0GHz processors, while the MegaRAID SCSI 320-2X with 512MB cache had already been tested on our default storage testbed based on the AMD 8000 chipset and one Opteron 240 processor. The differences in test configurations are because of a pending test of PCI Express and PCI-X SCSI RAID adapters. The Opteron system doesn't have PCI Express, so we had to use different configuration. There is only a very small difference in I/O performance between the Intel and AMD system, mostly less than one percent.

LSI MegaRAID SCSI 320-2E
The Adaptec 2230SLP kit with cables is priced at approximately 670 euro. The LSI MegaRAID SCSI 320-2X standard version with 128Mb costs 760 euro. The price level of the dual channel Ultra320 SCSI RAID adapters is not far off from the prices of the 8-port intelligent SATA RAID-adapters from 3ware and Areca. The price difference between a 18GB Maxtor Atlas 15K and a Raptor WD740GD is about 20 euro in advantage of the Atlas 15K. Obviously, the Raptor WD740GD has a large advantage in terms of capacity. To keep the graphs readable, the results of the old 3ware Escalade 8506-8 and the 4-port Promise FastTrak S150 SX4 have been left out.

The results of the workstation index show a picture that will be returning in many other tests. The SCSI cards can be found at the bottom and the top of the graph. So certainly, performance is affected by much more factors than just the interface. The performance of the RAID adapter and the hard drives used in the array are certainly more important than the the disk interface. Starting at four drives, the best performance is achieved by the MegaRAID SCSI 320-2X with 512MB cache. The Areca ARC-1120 is biting at the 320-2X's tail, however. The MegaRAID SCSI 320-2X with 128MB cache and the Adaptec 2230SLP are filling the gap between next fastest SATA RAID adapters, the RAIDCore BC452 and the HighPoint RocketRAID 1820A.

Note: Since the original Dutch article was published in late January, we have finished tests of the 16-port Areca ARC-1160 using 128MB, 512MB and 1GB cache configurations and RAID 5 arrays of up to 12 drives. The ARC-1160 was using the latest 1.35 beta firmware. Furthermore, a non-disclosure agreement on the LSI Logic MegaRAID SCSI 320-2E PCI Express x8 SCSI RAID adapter was lifted. The performance graphs have been updated to include the Areca ARC-1160 and LSI MegaRAID SCSI 320-2E results. Discussions of the results have not been updated, however. The results should be self-explanatory.

The performance in the server index are in favour of the SCSI RAID adapters. The MegaRAID SCSI 320-2X with 512MB cache triumphs over its competitors having headroom to spare. In second place we find its brother with 128MB cache, followed by the Areca ARC-1120, RAIDCore BC4852, Adaptec 2230SLP, LSI MegaRAID SATA 150-4/6 and LSI MegaRAID Elite 1600. The position of SATA RAID compared to SCSI RAID is not bad if price/capacity is an important consideration. The Areca ARC-1120 with six Raptor WD740GDs in RAID 5 costs roughly the same as the MegaRAID SCSI 320-2X 128MB with four 36GB 15,000rpm harddisks (price approximately 190 euro a piece) in RAID 5. The SATA configuration offers roughly 3.5 times more storage capacity, while the performance of six Raptors will exceed the performance of four 15K drives in many scenarios. 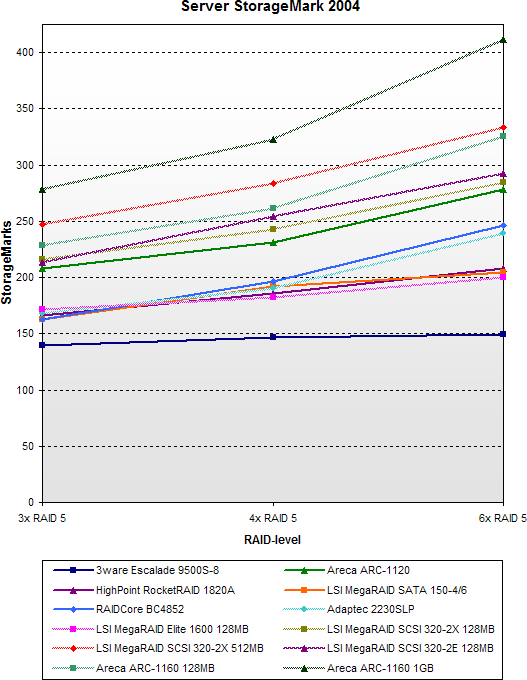 The fileserver simulation is a lot more in favor of the SATA RAID adapters. The Areca ARC-1120 is in close fighting with the Adaptec 2230SLP to challenge the previous top position of the LSI Logic Ultra320 SCSI RAID adapters. Good results are also delivered by the RAIDCORE BC4852. On the last place we find the LSI MegaRAID Elite 1600, just slightly behind the not-so-talented 3ware Escalade 9500S-8.

The large portion of random I/Os in the database simulation are ideally suited for 15K SCSI disks. The Maxtor Atlas 15Ks have lower average access times than the Raptor WD740GD and feature a working command queuing mechanism. The MegaRAID SCSI 320-2X is the first adapter to pass the finish line. The 320-2X is followed at some distance by the LSI MegaRAID elite 1600 and the Adaptec 2230SLP, delivering performance levels comparable to the SATA RAID adapters. 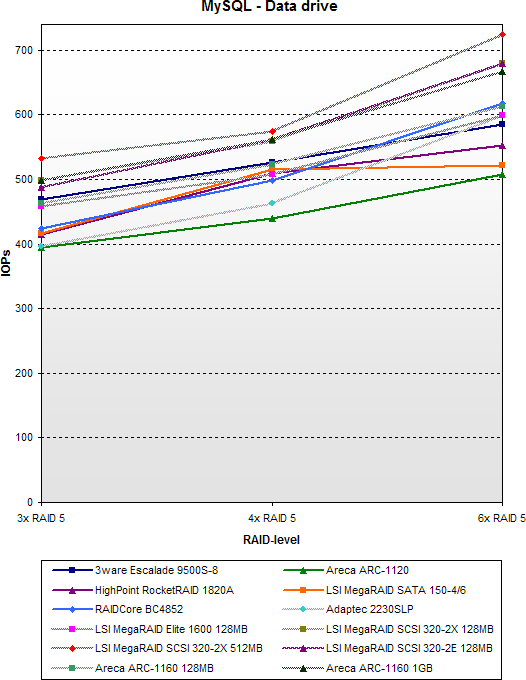 The Areca ARC-1120 is doing an excellent job in the streaming medium simulation, while the Adaptec 2230SLP claims second place. The SCSI RAID adapters from LSI Logic are moderate performers in this particular test. Only in the six driveconfiguration they are climbing to the same level as the Serial ATA configurations. Once again we can conclude that no pronounced difference between SATA and SCSI RAID exists.

Finally, we will discuss the performance in the Exchange 2003 simulation. The high concurrency scenario turns out te be an easy win for the LSI Logic SCSI RAID adapters. The performance advantage over the SATA RAID adapters is striking. The SCSI contenders are not invincible in the Exchange 2003 simulation, however. The Adaptec 2230SLP spoils a bit of the SCSI reputation by having only moderate performance, falling behind the LSI MegaRAID SATA 150-4/6 and the RAIDCore BC4852. The RAID adapters from LSI Logic are perfectly suited for database servers and other applications built on database technology, Exchange 2003 for instance. 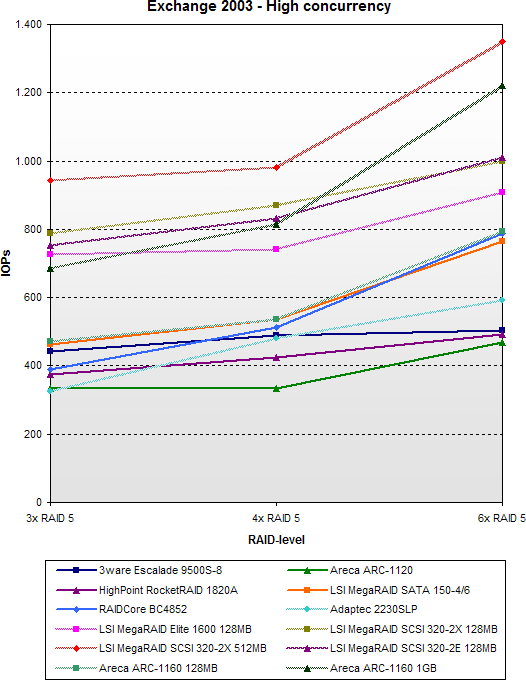 The morale of the above story should be clear: no straight answer can be given to the question which interface performs the best in server applications. SATA configurations perform admirably well in file server and streaming media scenarios, while SCSI configurations (dependent on the specific type of adapter and harddisks) are king of the hill in database applications. With the arrival of Serial ATA II all shortcomings of the ATA-interface concerning performance and reliability have been solved. A new generation of hard disks, supporting native command queuing, will be able to offer even better performance than the Raptor WD740GD in this comparison. At the same time, the arrival of Serial Attached SCSI and future SAS-harddisks with spindle speeds of 22,000rpm ensure that the SCSI interface will consolidate its unique featureset and its performance advantage in certain workloads. SCSI, thanks to its higher level market position, will always be the technology to profit first from technological advancements. These technological advantage will not only affect harddisk performance, but will also have its effect on RAID adapter performance. The higher priced SAS RAID solutions will be equipped with the latest generation I/O processors and larger amounts of cache memory, for instance. In the low-end server market - single and dual processors sytems using direct attached storage - Serial ATA will become a mature and powerful alternative to SCSI.