Another application for which SATA RAID is very well suited is streaming media. The streaming of large quantities of video content demands high disk capacities and high sequential transfer rates. On both points, Serial ATA-hard disks are up to the job. SCSI-hard disks spinning at 10,000 and 15,000 rotations per minute are better performers than typical 7,200 rpm SATA disks and (in some cases) the 10,000rpm Raptor WD740GD. The performance advantage is hardly in proportion to the price difference, however. Moreover, RAID adapters also have a considerable influence on the overall performance of the storage array.

The streaming media scenarios were simulated using Windows Media Services 9, the streaming media server built into Windows server 2003. Load was generated on the clients by using Microsoft Media Load Simulator. The video content on the server conisted of Windows Media videos with different sizes and bitrates. Two scenarios were simulated; the first having a restricted dataset of 6GB and a restricted server memory of 2GB, the second one with a larger 19GB dataset and 4GB of server RAM. Thanks to the large amount of RAM, a huge disk cache could be used by the streaming media server. In both scenarios hundreds of clients were simulated by the load simulator. On this page we will discuss the results of the large dataset scenario.

During a part of the trace, a video stream was uploaded to the server at a transfer rate of approximately 800KB/s. An average disk transfer rate of 20.5MB/s was achieved during the trace. 98 percent of the disk I/O were read operations. In spite of the large number of clients, the average queue length was only 3.5 I/Os. Nevertheless, the disk usage was extremely high, averaging at 89 percents.

Thanks to their excellent mirroring optimizations in 3ware's RAID stack, the Escalade 8506-8 and 9500S-8 are able to take the lead in the RAID 1 and RAID 10 benchmarks. The Areca ARC-1120 offers good performance in RAID 10 with four drives, but unfortunately falls behind in RAID 1. Moderate performance levels were delivered by the LSI MegaRAID SATA 150-4/6 and the Promise FastTrak S150 SX4. The HighPoint RocketRAID 1820A and the RAIDCore BC4852 performed rather disappointing. The poor RAID 1 and RAID 10 performance of the BC4852 has been observed before. 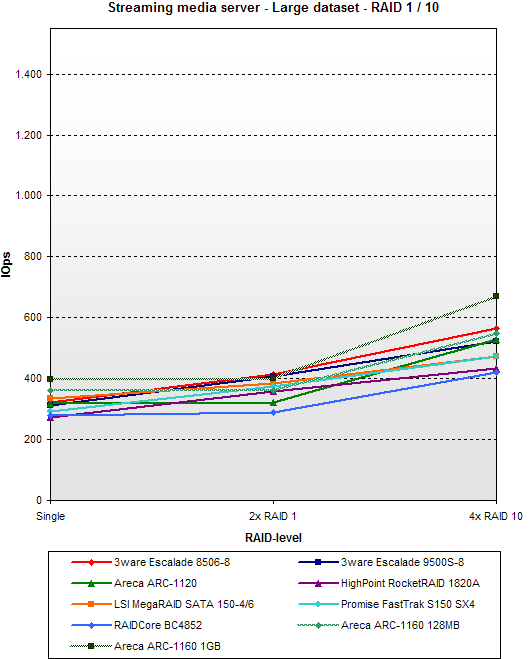 The RAID 5 graph tells a completely different story. The Areca ARC-1120 is far ahead of its competitors and almost breaks through the roof of the graph. A rare decline in the RAID 5 formation consisting of eight disks is no threat to its throne. The 3ware Ecalade 9500S-8 is on a well deserved second place, showing higher than average performance scaling. The remaining contenders are quite close to each other in terms of performance. The one exception is the Promise FastTrak S150 SX4, which showed absolutely no performance scaling. 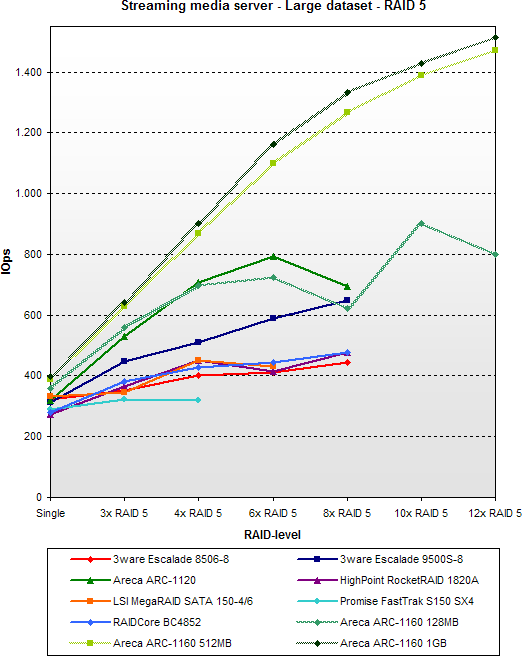 Generally, mailserver and database server storage is still dominated by SCSI RAID solutions. In situations not requiring the best available performance, there is no reason to exclude Serial ATA by definition. To be able to test the workloads of large mail servers we used Exchange 2003 and Microsoft Load Simulator to create simulations of medium sized and large scale Exchange environments. The medium concurrency Exchange scenario simulates 500 users, of which 150 were heavy users and 350 were using an average profile. The dataset, sized 33GB, was distributed over the whole range of the 73GB RAID 10 data array. Logfiles were seperated on a RAID 1 array. The medium concurrency Exchange 2003 scenario obviously is a playback of the data drive. The writing of the logfiles is largely sequential by nature, putting no high demands on the performance of the storage array. The load simulation generated an average transfer rate of 4.3MB/s and an average I/O rate of 810 IOps on the data array. An extremely high average disk usage of 99 percent and the low average transfer rate are evidence for the highly randomized characteristics of the access patterns. Overall, 49.4 percent of the I/O operations and 57.6 percent of the data movements were caused by write activity, while the I/O queue length averaged 16.1 outstanding I/Os.

The LSI MegaRAID SATA 150-4/6 has previously proved to cope well in situations consisting of high levels of random I/O. That is also the case in the RAID 1 and RAID 5 mailserver simulations. Unfortunately, the MegaRAID is unable to keep pace in RAID 10. The mirroring and striping discipline is better mastered by the two 3ware adapters. We are less positive about the performance of the Areca ARC-1120 and the RAIDCore BC4852. Both adapters perform badly in RAID 1 and RAID 10. 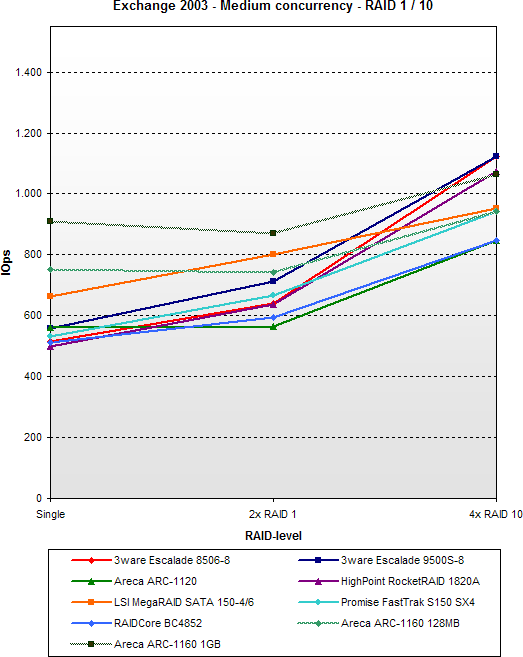 In the RAID 5 test, we once again observe good performance by the MegaRAID, although the I/O performance does not improve when using more than four drives. The RAIDCore BC4852 does a fantastic job and is faster than the MegaRAID in arrays consisting of more than five disks. The differences in the midfield, consisting out of the HighPoint RocketRAID 1820A and the Areca ARC-1120, are considerably large. Disappointing results were achieved by the Promise FastTrak S150 SX4 and the 3ware cards. The Escalade 9500S-8 comes along quite nicely in the configurations with three and four disks, however. 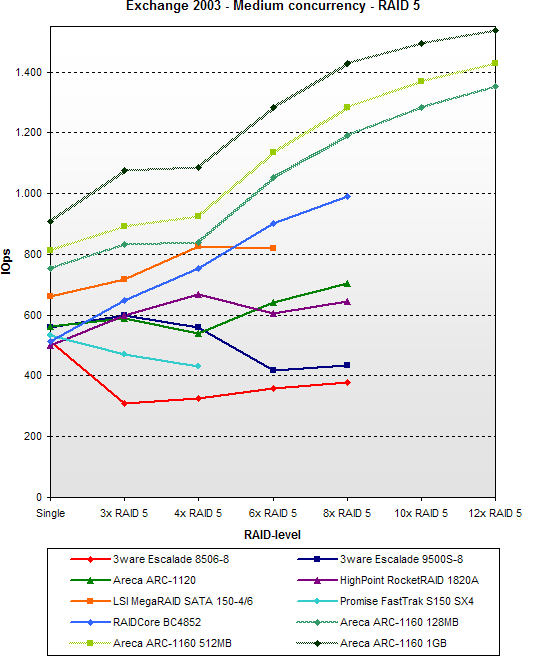 For the high concurrency Exchange scenario, the number of mailserver users was raised to 1500. Out of these 1500 users, 700 were average users, 500 were heavy users and 300 users were using the so called cached mode. The larger number of users ensures a considerable increase in mailserver workload. The average transfer rate in this trace rised to 6.45MB/s and the average I/O rate went up to 1047 IOps. 46.3 Percent of the data movements existed out of writes and 35.2 percent of I/O operations existed out of write operations. The increased workload caused an enormous increase of the queue length, now averaging at 72.3 I/Os. The mode (most occuring queue length) was lower however, around 48 I/Os. Hence, the high concurrency simulation is an extremely heavy scenario that will only occur on very large mailservers.

Due to the high proportion of random I/O, the Areca ARC-1120 performs badly in this scenario. Once almighty, it now occupies a sad last place in the ranking of the RAID 1 and RAID 10 performance. The results of the LSI MegaRAID SATA 150-4/6 and the 3ware Escalade 9500S-8 are excellent. To a lesser degree the same applies to the older Escalade 8506-8. The midfield is formed by the adapters manufactured by Promise, RAIDCore and HighPoint. 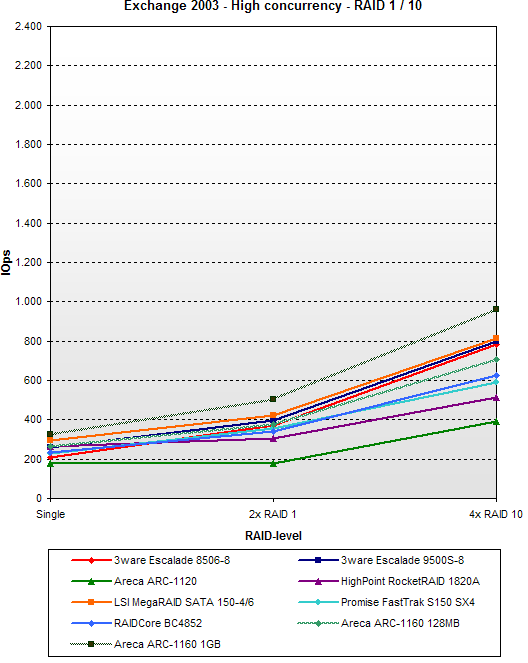 In the RAID 5 test the LSI MegaRAID SATA 150-4/6 again showes surprisingly good performance. Even with six disks, the MegaRAID was hardly inferior to the RAIDCore BC4852. The remaing contenders scaled much less than the delegates from LSI Logic and RAIDCore. The performance of the 3ware Escalade 8506-8 is a sad story and even the Areca ARC-1120 disappoints. We are curious about the improvements promised by the latest firmware. 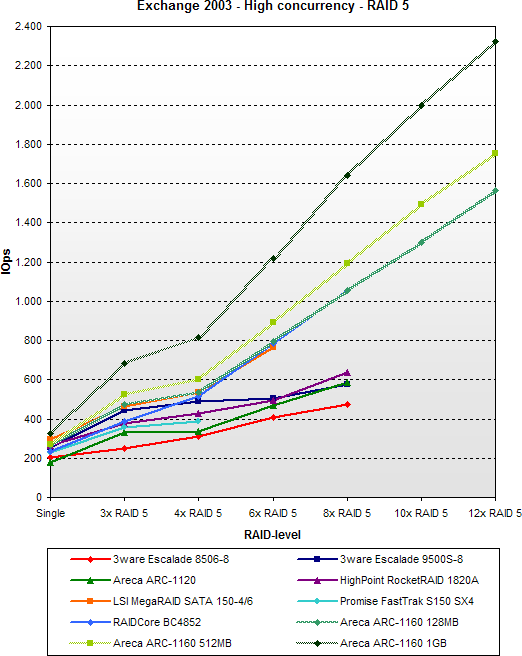