The possibilities of IOMeter reach much further then creating sequential access patterns with a certain read/write proportion. It's also possible to compose access patterns with a certain degree of randomness and a certain distribution of transfer sizes. Years ago, Intel, the original IOMeter developer, created a file access pattern that nowadays is used by many websites to measure the server performance of hard drives and RAID adapters. Storage Review and Tom's Hardware Guide are examples of sites using the IOMeter fileserver pattern. The IOMeter server simulation consists of a 100 percent random access pattern with an 80/20 read/write proportion and transfer sizes starting at 512 bytes and going up to 64KB. 4KB transfers are occurring 60 per cent of the time, 512 bytes (10 per cent) and 64KB (10 per cent). The test is performed at gradually increasing queue lengths of 1, 2, 4, 8, 16, 32 and 64 outstanding I/Os. To enable an easy comparison of the performance in the IOMeter fileserver simulation, the results of the tests with various queue depths are converted to a weighted average. This average is weighted in order to prevent the results from the large queue depths having a greater influence on the performance average. Hard disks and RAID arrays usually attain their maximum performance at the highest queue depths.

The above approach to file server performance is obviously rather theoretically. For this reason, the importance of the IOMeter file server simulation should not be exaggerated. Using Intel IPEAK Storage Performance Toolkit, Tweakers.net has created a number of server workload simulations that have been based on the access patterns of real world server applications. These benchmarks have more affinity with real world workloads.

IOMeter, however, remains useful for low-level performance measurements. The performance in the IOMeter fileserver simulation is largely determined by the access times and the command queuing performance of the hard disk. In case of a RAID array, the ability of the RAID controller to divide I/O operations over the spindles in the array, also affects performance grealy. Outstanding results in the IOMeter random I/O access patterns can be useful to explain the performance characteristics of the RAID adapters in our database and mail server workloads, which also have a large proportion of random I/O. Because of the random nature of the access patterns, transfer rates are very low in this test. Bottlenecks in bus bandwidth and the processing power of the I/O processor won't have a significant impact on the performance.

The IOMeter fileserver simulation was performed in the RAID levels 1, 10 and 5. No tests were performed in RAID 0 because this RAID level is unsuitable for use in server environments. The RAID 1 and RAID 10 benchmarks show excellent results from the 3ware Escalade 9500S-8 and the Promise FastTrak S150 SX4. The Escalade 9500S-8 is the best performing adapter in the RAID 10 test. The performance of the HighPoint RocketRAID 1820A and the Areca ARC-1120 is disappointing. Especially the last one lags behind its competitors.

Note: Since the original Dutch article was published in late January, we have finished tests of the 16-port Areca ARC-1160 using 128MB, 512MB and 1GB cache configurations and RAID 5 arrays of up to 12 drives. The ARC-1160 was using the latest 1.35 beta firmware. The performance graphs have been updated to include the ARC-1160 results. Discussions of the results have not been updated, however. The ARC-1160 delivers slightly lower base performance than the ARC-1120, possibly due to increased bus overhead caused by the presence of a second Marvell SATA controller. Random I/O performance has increased considerably thanks to the new firmware. The results should be self-explanatory. 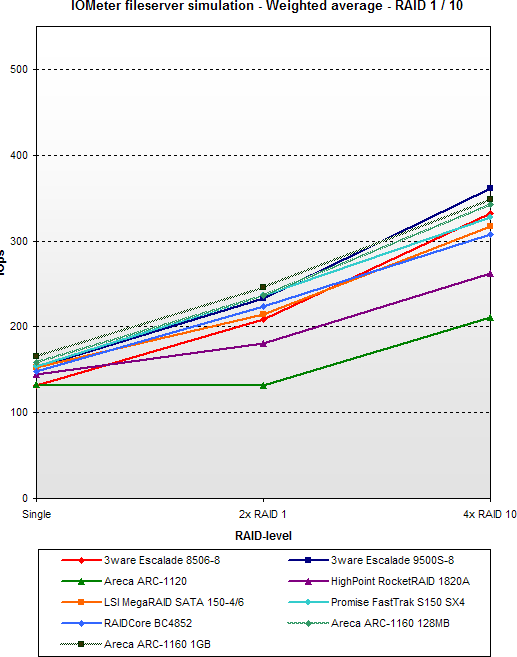 The 3ware Escalade 9500S-8 once again shows excellent performance in the RAID 5 tests. Reasonable results were delivered by the LSI MegaRAID SATA 150-4/6, Promise FastTrak S150 SX4 and RAIDCore BC4852. The Areca ARC-1120 and the HighPoint RocketRAID 1820A, accompenied by the 3ware Escalade 8506-8, are at the bottom of the field. The disappointing random I/O performance of the ARC-1120 has already been confirmed by Areca. The company has developed a firmware update, which will remedy these problems (see