The results of the ATTO Disk Benchmark have shown large differences between the RAID 5 write transfer rates of the various RAID adapters. Because RAID 5 parity has to be calculated before write operations can be finished, write operations are stressful for the I/O processor or the CPU (in the case of hostbased RAID 5 adapters). There is an almost linear dependency between CPU or I/O processor and the write transfer rate. Nearly all intelligent adapters reach a maximum transfer rate at some point. With a hostbased adapter this maximum is determined by the CPU performance and the bus bandwidth.

Because ATTO is cache-sensitive and its test duration is too short to make reliable conclusions, other test methods are necessary to compare the media write transfer rates of the RAID adapters. IOMeter offers the possibility to compose custom access patterns. We have created a test with a 2 minute duration, in which data is sequentially written to the disk at a transfer size of 1MB per I/O. Besides measuring the transfer rate, IOMeter also gathers statistics of the CPU usage, the number of interrupts and the number of I/O operations processed.

In the RAID 0 tests, parity calculations don't play a part. Nevertheless many cards are exhibiting bottlenecks. The LSI MegaRAID SATA 150-4 and Promise FastTrak S150 SX4 perform well below average and the performance scaling of the 3ware Escalade 8506-8, 3ware Escalade 9500S-8 and HighPoint RocketRAID 1820A are far from optimal. Nevertheless, the Escalade 8506-8 is the best performing card in the RAID 0 configuration with two drives. The Areca ARC-1120 and the RAIDCore BC4852 are the only two adapters which have an excellent STR scaling when four drives are attached. The BC4852 only has a moderate score in the two disk configuration, however. 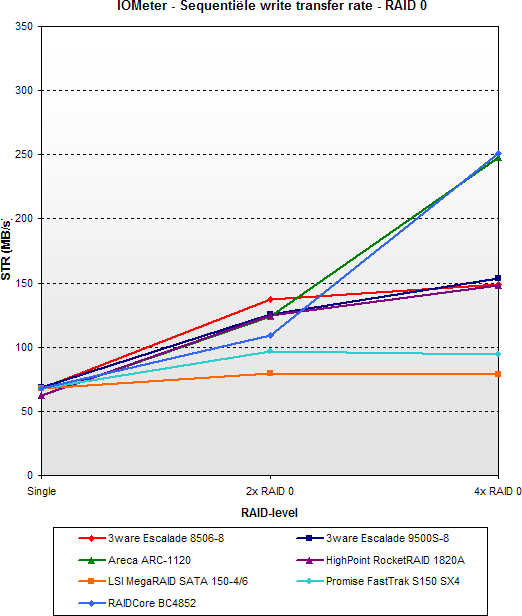 The LSI MegaRAID SATA 150-4/6, the 3ware Escalade 8506-8 and the Promise FastTrak S150 SX4 are setting moderate performance scores in the RAID 10 test. The write transfer rates of the Areca ARC-1120, HighPoint RocketRAID 1820A and RAIDCore BC4852 clearly are on a higher level. 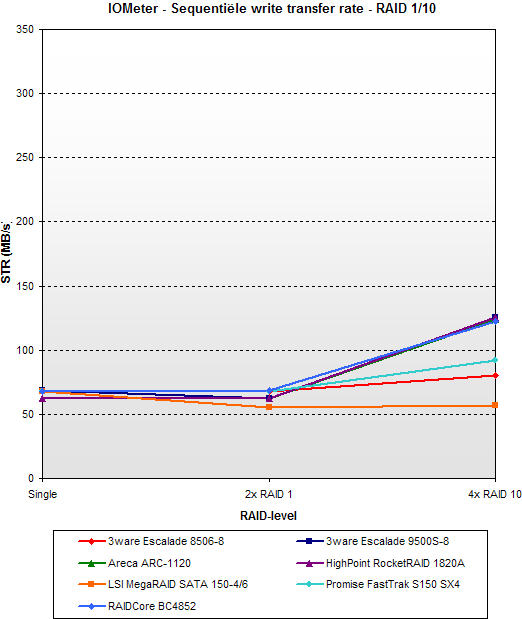 As expected, large differences come to surface in the RAID 5 test. The HighPoint RocketRAID 1820A and the RAIDCore BC4852 can profit from the high performance of the latest generation CPUs. With eight disks configured in RAID 5, write speeds are reaching transfer rates of almost 350MB/s. In theory, both adapters should be able to perform even better, however a near 100 percent CPU usage on our 1,4GHz Opteron 240 processor prevents further scaling of the write transfer rate. Despite its modern architecture, the Areca ARC-1120 is not free of bottlenecks. The maximum write transfer rate is reached at 240MB/s. The 3ware Escalade 9500S-8 is limited to a write STR of 100MB/s, while its predecessor won't scale beyond 75MB/s. In between we find the Promise FastTrak S150 SX4 having a transfer rate just a bit over 90MB/s. At the bottom of the graph we find the LSI MegaRAID SATA 150-4/6 working hard to put a miserable 55MB/s on the scoreboard. 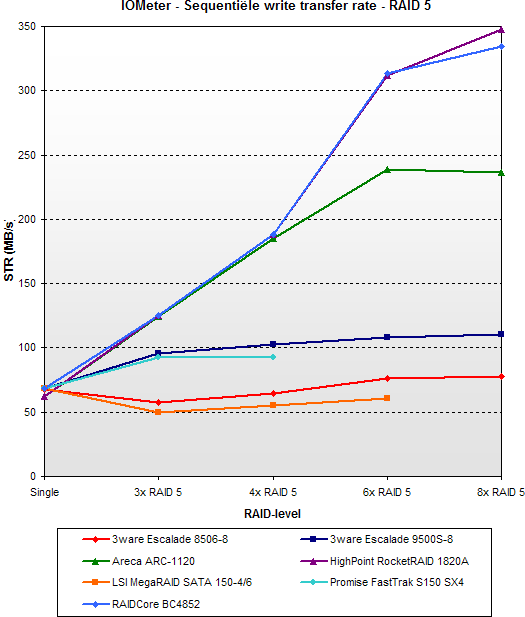 The picture above looks great for the hostbased RAID adapters in this comparison. There is a downside to the excellent write transfer rates of these adapters, being the high processor loads involved. To enable a fair comparison, not only the transfer rate but also the CPU usage should be taken into consideration. As said before, the CPU load is almost linearly dependent on the write transfer rate. For this reason, we have created a comparison of the relative CPU usage per 100MB/s transfer rate. In general, the relative processor usage remains constant at different RAID levels and array sizes. For this reason, we only show the results of RAID 0, RAID 10 and RAID 5 configurations with four disks. Obviously, the CPU usage is dependent on the performance of the processor. The Opteron 240 in our test system is no speed maniac.

The Areca ARC-1120, 3ware Escalade 8506-8 and HighPoint RocketRAID 1820A have the lowest relative processor usage in the RAID 0 test. All of these cards scored a CPU usage of less than two per cent per 100MB/s write transfers. On short distance, the performance of the first group of three is followed by the 3ware Escalade 9500S-8, setting a relative CPU usage of 2.30 percent. The results of the HighPoint RocketRAID 1820A are excellent. In spite of the fact that the RAID calculations on this card are not offloaded to hardware, the relative processor usage is hardly higher than the best performing intelligent RAID adapters. At 4.17 percent, the results of the RAIDCore BC4852 are somewhat behind the top performers. The Promise FastTrak S150 SX4 leaves no doubt that much of the RAID routines are handles by the CPU. An astonishing bad result is set by the LSI MegaRAID SATA 150-4/6. In spite of its intelligent nature, this card finished last place with a relative processor usage of 12.60 percent. I must be said here that the write transfer rate of the MegaRAID was below 100MB/s, so the real processor usage is less than 12.60 percent.

The results of the RAID 10 benchmarks are once again positive for 3ware the Escalade 9500S-8, the Areca ARC-1120 and the HighPoint RocketRAID 1820A. The most striking change with respect to the RAID 0 test is the disappointing performance of the 3ware Escalade 8506-8 (12.35 percent) and the Promise FastTrak S150 SX4 (15.04 percent).

The extra workload for parity calculations caused the RAIDCore BC4852 and the HighPoint RocketRAID 1820A to have, by far, the highest relative processor usage in the RAID-5 test. The Promise FastTrak S150 SX4 uses a hardware XOR-processor and as a result its processor usage is no higher then in RAID 0. The 3ware Escalade 8506-8, the Areca ARC-1120 and 3ware the Escalade use 9500S-8 finished on top.

People who have been shocked by the results shown above, must realise that the processor usage of the hostbased RAID adapters are in direct relation to the write transfer rates and the CPU performance. In the real world, write transfer rates will rarely exceed hundreds of megabytes per second. Only a few applications write data at transfer rates this high. In many cases data will not be written to the disk in a sequential pattern, therefore performance is limited by the latencies caused by head movements. Transfer rates of hundreds of MB/s are impossible when the disks have to seek contineously, for instance in server systems where data is written to different locations on the array. Moreover, the processors of the latest desktop and server systems are more powerful than the Opteron 240 used in our testbed. The higher processor load of hostbased RAID adapters doesn't have to an obstacle in the real world. Nevertheless, it is still wise chose intelligent RAID over hostbased RAID for server systems which already have high CPU loads caused by the applications running on these systems.