In similar manner as the Desktop StorageMark Index, Tweakers.net has created an index for the workstation performance of hard drives and RAID adapters. The workstation suite consists of traces from workstation applications, like Adobe Premiere, Adobe Photoshop, Newtek LightWave, Steinberg Wavelab, Macromedia Director MX and Windows Media Encoder, together with traces from desktop applications in moderate and heavy multi-tasking scenarios. Furthermorem traces from copy actions, file compression, DVD ripping (also representative for certain video-editing related tasks), audio-editing and Photoshop load/save actions have been added. Details concerning the composition of this index can read

In RAID 1 and RAID 10, the Areca ARC-1120 again achieves good results. The 3ware Escalade 9500S-8 also weathered the storm. Given the generally positive image we got about the RAIDCore BC4852, the performance in this test was a bit disappointing. In the RAID 1 test it even dangles at the bottom of the graph. The prize for worst scaling adapter once again was admitted to the LSI MegaRAID SATA 150-4/6. 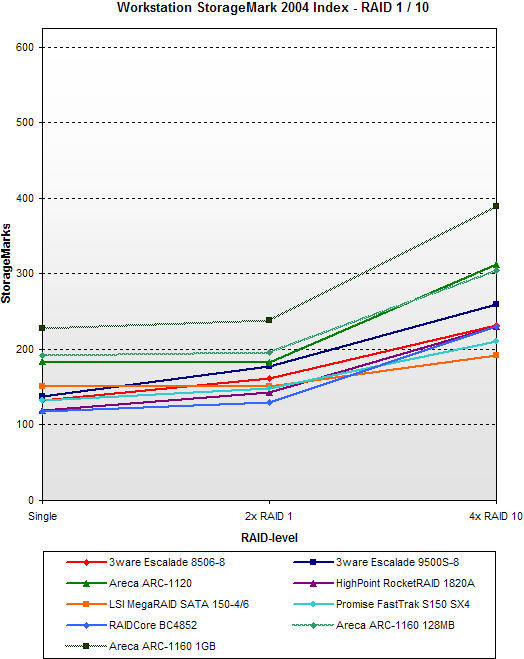 The traces in the workstation suite consist of a relatively large portion of sequential disk accesses. Also, there are a lot of sequential write actions, for example in the DVD ripping trace and the Photoshop load/save test, where Photoshop frequently uses its pagefiles. This means that a higher load is put on the XOR accelerators of the intelligent and hardware assisted RAID adapters, or a higher load is placed on the CPU in configurations with hostbased RAID adapters. Adapters with bad scaling proporties or an unsufficiently powerful architecture won't escape judgement in this test. 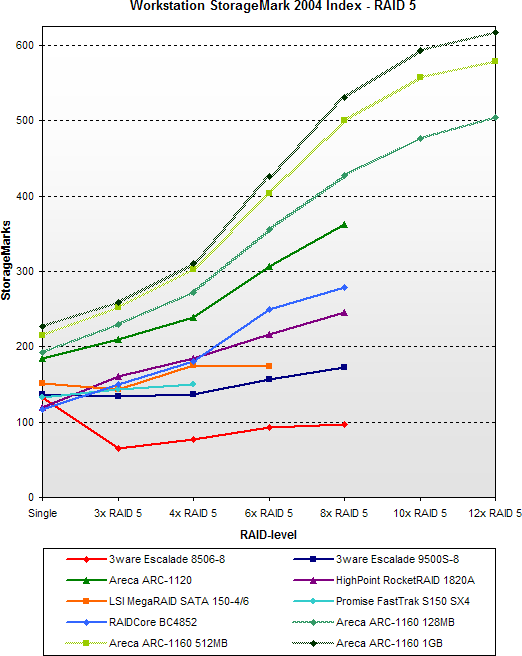