Fileserving is another exemple of a server application for which Serial ATA RAID is ideally suited. Serial ATA's low price per gigabyte is especially suited for applications requiring large storage capacities, for instance storage of rich media content. The behaviour of a fileserver was simulated using a set of PHP scripts and a group of seven Windows clients. The simulation server was stuffed wit all kinds of file types, filling a dataset of 73GB. The location and the size of the files were stored in a database hosted on one of the clients. Using this database, it was possible to randomly request files within a certain range of file sizes. Locality was also take into account: there was an increased likelihood that successively requested files were located in the same directory. In same cases, files were only partially opened. Because the simulation server was equipped with 8GB of RAM (4GB effectively in 32-bit Windows), a large disk cache could be used, decreasing read operations in the disk array. Three fileserver scenarios were created: small filesize, medium filesize and large filesize.

The Areca ARC-1120 performs very well in the medium filesize scenario. The ARC-1120 once again finishes first place in the RAID 10 test, way ahead of the competition. The 3ware Escalade 8506-8 and the HighPoint RocketRAID 1820A are second an third place. In RAID 1, the differences between the previously mentioned boards and the LSI MegaRAID SATA 150-4/6 are minimal. All four performed exceptionally good. In our previous benchmarks, the RAIDCore BC4852 showed moderate performance in RAID 1 and RAID 10. The performance level is no different in the medium filesize fileserver scenario. RAIDCore's driver developers certainly have some work to do to improve mirroring optimizations in the Fulcrum RAID stack. 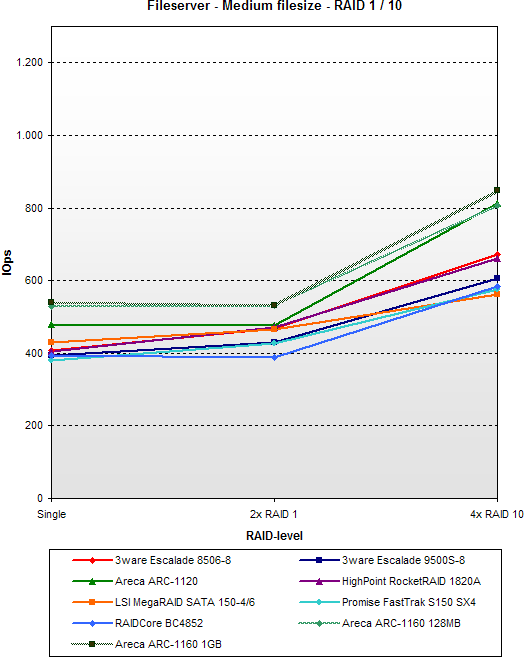 The Areca ARC-1120 collects another victory in the RAID 5 tests. Areca's SATA RAID adapters are perfectly suited for use in fileservers with similar workloads to our medium filesize scenario. The good performance of the RAIDCore BC4852 and the bad performance of the 3ware-cards won't suprise anyone. 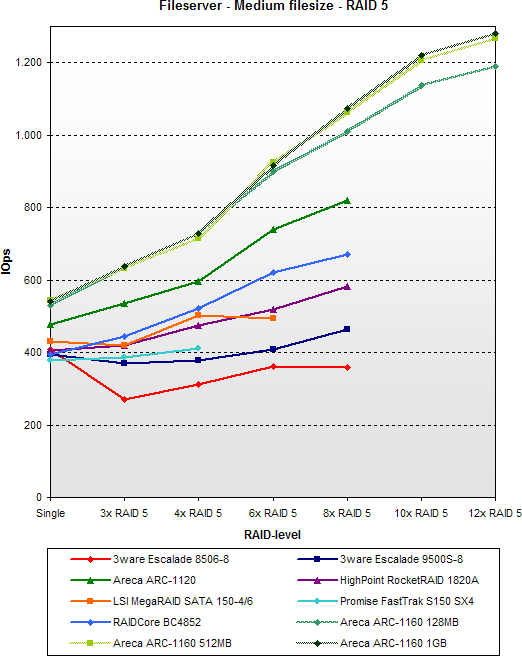 The RAID 1 and RAID 10 tests of the large filesize scenario is the first server benchmark in which the Areca ARC-1120 does not claim victory. The performance of ARC-1120 is really disappointing. The best performance is set by the 3ware Escalade 8506-8 and the LSI MegaRAID SATA 150-4/6. 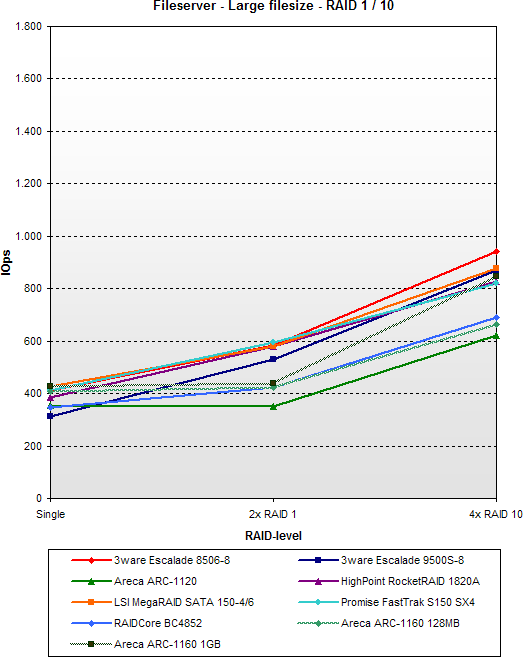 The Areca ARC-1120 revenges in the RAID 5 tests. The performance is right up with the RAIDCore BC4852 and the LSI MegaRAID SATA 150-4/6, which performed surprisingly well in this test. The ARC-1120 offers the best overall performances of this group, though. For the first time, the Escalade 9500S-8's RAID 5 performance is able to keep up with the competition. This will undoubtedly be different when the distribution of read and write operations changes to a relatively higher number of writes. 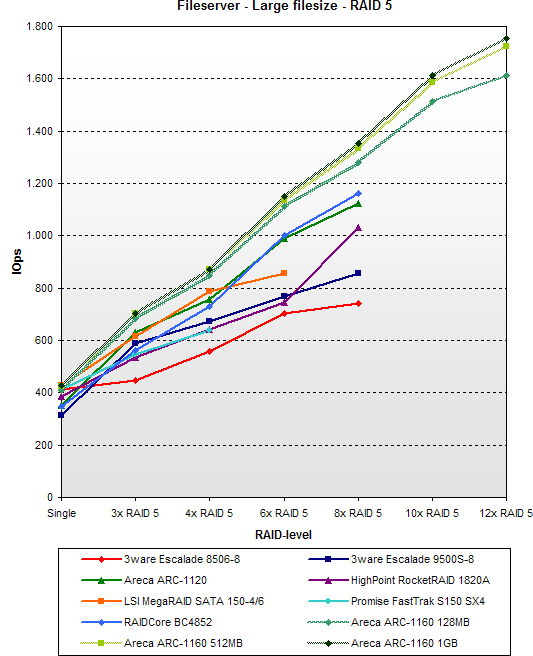