Alternatives not included in this review

This article is not only a review of a certain group of Serial ATA RAID adapters, it is also a discussion of current Serial ATA technology and SATA RAID products. On this page we will briefly discuss the alternatives from manufacturers which have not been included in the test. The selection has been restricted to adapters falling into the same scope as the products in the review, meaning the products at least need to have support for RAID 5.

Adaptec provides three adapters in versions with four, eight and sixteen ports. These are respectively the 2410SA, 2810SA and 21610SA. The hardware implementation of these cards strongly corresponds to the adapters from LSI Logic, discussed previously in this article. The 2410SA is based on a 66MHz IOP302 processor in combination with two Silicon Image Sil 3112 SATA controllers and 64MB memory. The eight and sixteen port versions are using the slightly faster 100MHz IOP303 processors. The SATA controller is not recognisable from the product photograph. Supposedly Adaptec uses the 4-port Silicon Image Sil 3114 chips, which in that case should be placed on both sides of the PCB. All products are equipped with a 64-bit 66MHz PCI interface and 64MB cache. The 8- and 16-port modules can be extended with a battery backup Unit. 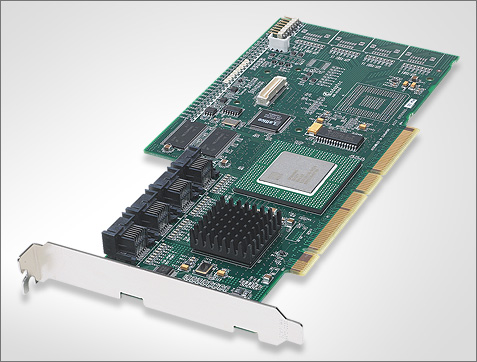 Adaptec 2810SA
Based on earlier experiences with equally configured SCSI RAID adapters from Adaptec, ICP Vortex and LSI Logic, and experiences with the SATA RAID adapters from ICP Vortex and LSI Logic, we expect the performance of the 2410SA and 2810SA to be somewhat below the level of the ICP Vortex adapters. ICP's adapters for their part are somewhat slower than the adapters from LSI Logic. The Adaptec 2810SA and 21610SA should be primarly considered as a solution to create large storage volumes. The performance of the IOP303 is insufficient to reach satisfactory performance scaling on large RAID 5 arrays. The Silicon Image Sil 3114 controllers are also restricting bandwidth to 266MB/s because the controllers have to share a single 32-bit 66MHz PCI connection. The bad scaling characteristics of the IOP302 and IOP303 are the reason that we have not conducted tests on IOP302/303-based products other than the popular MegaRAID SATA 150-4 and 150-6 adapters.

The German manufacturer ICP Vortex was acquired by Adaptec in 2003. Before this take-over the company was property of Intel. The current ICP Vortex product line still has no integration with Adaptec's products. ICP Vortex offers its own line of SATA RAID adapters, consisting of the 4-port GDT8546RZ and the 8-port GDT8586RZ. The cards are respectively equipped with two and four Silicon Image Sil 3112-controllers, and both are based on a 100MHz IOP303-processor in combination with 128MB memory. The GDT8546RZ was tested in our previous SATA RAID comparison and performed below the level of the LSI megaRAID SATA 150-4. Partly because of its German background, ICP Vortex solutions are very expensive. The 4-port model is priced 599 euro and the 8-port version comes with a price tag of 925 euro. 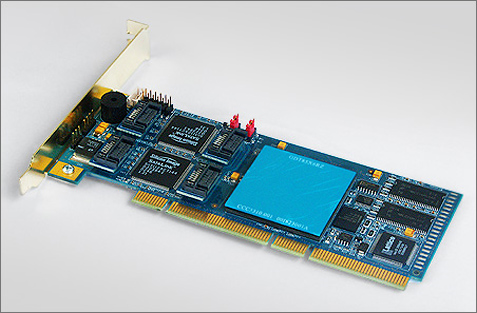 NetCell is a small startup, which has specialised in the development of ATA RAID technology. NetCell's product line consists of 3-port and 5-port adapters, supporting the self proclaimed 'RAID XL' level. Besides RAID XL, the RAID levels 0 and 1 are supported as well. With respect to parity distribution, the functioning of RAID XL is similar to RAID 4: one disk is designated to parity information. Therefore parity is not distributed over all disks, as is the case with RAID 5. According to NetCell, this produces a performance advantage in desktop applications. A unique feature of the NetCell adapters is the fact that arrays are presented to the operating system as regular ATA disks. Thanks to this feature there is no need for special drivers. The NetCell adapters are equipped with 64MB cache and a 32-bit 66MHz PCI interface. The US price is 219 dollars for the 3 port model and 249 dollars for the 5-port version.

Based on Areca's hardware design and RAID software stack, Tekram recently annouced a line of Tekram-branded intelligent SATA RAID adapters. The adapters will become available in 4- and 8-port versions with PCI-X and PCI Express interfaces. Like the adapters from Areca, the Tekram controllers are supporting RAID 6. Tekram aims at a lower market segment. By using cheaper components - Tekram-cards use 250MHz processors and older generation SATA/150 controllers from Marvell - Tekram was able to cut costs. The naming of the adapters is very recognisable for those familiar with the Areca product range. The Tekram version of the Areca ARC-1120 is named the SIR-1120. In Japan, the Tekram SIR-1120 is approximately 35 per cent cheaper than the Areca ARC-1120. In the Netherlands this difference would result in a price of approximately 410 euro, which is an attractive price level for an intelligent RAID adapter with eight ports. We soon hope to be able to test the Tekram cards.