Before introducing the players in this roundup it is important to define the objectives of this article. In the first place it is going to be a comparison of the features and performance of the discussed RAID-adapters. It's not that we don't value the importance of reliability and availability, but testing these factors in a sterile test environment is difficult, if not impossible. All adapters in this roundup have support for essential availability features such as hotplug, hotswap and hotspares. In controlled environmentss these products did exactly what was expected of them - hotswapping was no problem, automatic rebuilding was functional, capacity expansion worked, and so on. Unforeseen problems only come to the surface when the adapters are handed over to he whims of real-world surroundings with high duty cycles, 24/7 usage and the enormous variety in hardware. Incompatibility with motherboards, hard disks which suddenly drop out of the array, failed rebuilds due to certain rare conditions. It is the typical misery that only comes to surface in very well facilitated qualification procedures or real world use as described above. In this review, Tweakers.net doesn't pretend to make claims concerning the reliability and availability of the adapters. We however can and will make judgements concerning the performance of the participants in this roundup.

All of the participants in this test have a minimum of four SATA ports and support RAID 5. How these two conditions were met and which pricetag was put on, didn't matter for the composition of the test field. The result is a differed field of participants with prices ranging from 180 to 620 euro and some adapters having onboard processors while others are relying on the power of the CPU. While one adapter had to put up with a simple 32-bit PCI interface others could use PCI-X up to clock speeds up to 133Mhz. And one adapter already had support for Serial ATA II while other contestants used PATA bridge chips. The big differences in price, features and implementations made it all the more interesting to search for answers to the question which adapter scored best in the different areas; price, performance and features. 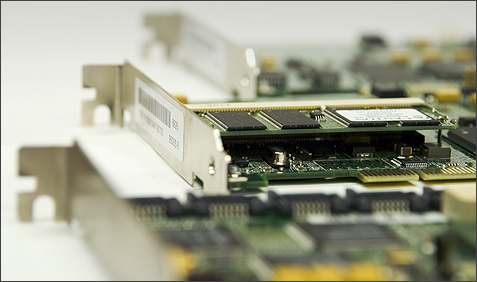 To get a picture of the latest state of the art in the land of the SATA RAID adapters we let come to the party eight adapters of the manufacturers 3ware, Areca, HighPoint, LSI Logic, Promise and RAIDCore. The contestants are successively the 3ware Escalade 8506-8, 3ware Escalade 9500S-8, Areca ARC-1120, HighPoint RocketRAID 1820A, LSI Logic MegaRAID SATA 150-4 and its sibling the 6-port MegaRAID SATA 150-6, the Promise FastTrak S150 SX4 and finally the RAIDCore BC4852. The Escalade 8506-8 is the successor of the Escalade 8500-8 whom we tested in our previous roundup. Meanwhile also this controller has gotten a successor, the Escalade 9500S-8. The LSI Logic MegaRAID SATA 150-4 and the Promise FastTrak S150 SX4 already participated in last year's review. The products of Areca, HighPoint and RAIDCore were announced last summer and belong to the select share of newcomers.

Note: Since the original Dutch article was published in late January, we have finished tests of the 16-port Areca ARC-1160 using 128MB, 512MB and 1GB cache configurations and RAID 5 arrays of up to 12 drives. The ARC-1160 was using the latest 1.35 beta firmware. Furthermore, a non-disclosure agreement on the LSI MegaRAID SCSI 320-2E PCI Express x8 SCSI RAID adapter was lifted. The performance graphs have been updated to include the Areca ARC-1160 and LSI MegaRAID SCSI 320-2E results. Discussions of the results have not been updated, however. The results should be self-explanatory.