LSI Logic is a manufacturer with an enormous presence in the storage market. Up to some years ago the company provided mainly building blocks for third parties, so their large presence hasn't yet translated into a brand reputation. According to its own figures, LSI Logic provides 80 percent of the Fibre Channel chips worldwide. What's more, over 80 percent of Ultra320 SCSI interfaces in servers use LSI Logic solutions. Lately, the company has also focused on consumer markets with the introduction of its own SCSI and Fibre Channel adapters, and its own line of RAID adapters. As a part of this strategy, the megaRAID division of American Megatrends and the RAID division of Mylex were successively taken over. LSI chose to continue the American Megatrends brand name and its RAID stack. The company has made quite some progress since then: Unique features of the Mylex RAID software stack were integrated into the megaRAID software stack, and the software stack was ported to the XScale architecture. As such, LSI Logic delivers a broad and modern line of serial RAID-adapters under the megaRAID brand name. In January 2004 the company was the first to market a SCSI RAID adapter based on Intel's new generation XScale I/O processors. 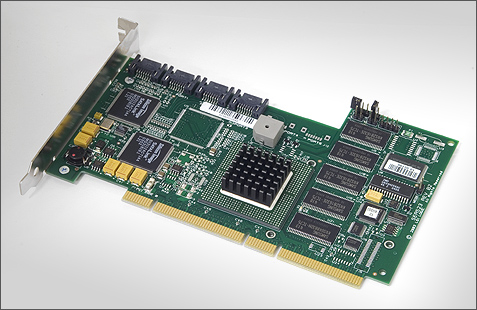 LSI MegaRAID SATA 150-4
In the spring of 2003, LSI Logic introduced their first Serial ATA RAID adapters. The MegaRAID SATA 150-4 and MegaRAID SATA 150-6 have four and six ports respectively, and have a nearly similar hardware design. The only differences between these cards are the presence of BBU connection, an extra SATA controller and two extra SATA connectors on the MegaRAID SATA 150-6. The core of both adapters is an outdated Intel IOP302 running at a clock speed of 66MHz. The I/O processor is assisted by 64MB SDRAM and two (SATA 150-4) or three (SATA 150-6) Silicon Image Sil 3112 controllers. These first generation controllers from Silicon Image have two ports and communicate with the I/O processor by means of a 32-bit 66MHz PCI bus. Although the PCI bridge of the IOP302 supports 64-bit 66MHz PCI (with a bandwidth of 533MB/s), communication with the SATA controllers is limited to 266MB/s. In reality this isn't a big issue since the IOP302 is too slow to be able to process such large quantities of data. Taken everything into consideration, the MegaRAID SATA 150-4 and its 6-port sibling are not that impressive. In our previous SATA RAID comparison, the MegaRAID SATA 150-4 faired good, but with increased competition from new and more modern RAID implementations, it shouldn't come as a surprise that these two LSI Logic cards will take some beatings. 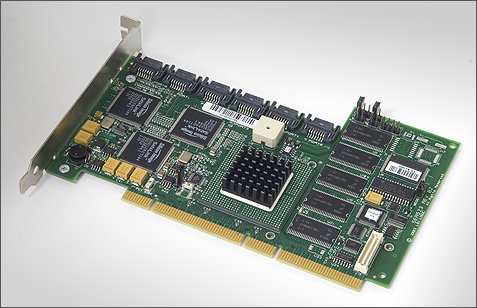 LSI MegaRAID SATA 150-6
The RAID software stack of the MegaRAID SATA 150-4 and 150-6 has been taken directly from the high-end LSI Logic SCSI RAID adapters. This means all essential RAID features are supported. LSI Logic is the only manufacturer that offers a graphical BIOS interface which can be operated with a mouse. This feature is significant in that it operates more pleasantly and it is better designed than the text-based interfaces of similar intelligent RAID adapters. Unfortunately, a web-based management interface is not available. However, the Windows management tool does offer the possibility to remotely manage RAID adapters over a local network. Microsoft operating systems are supported upwards from Windows 2000, unfortunately not including x64-versions of Windows XP and Windows server 2003. Drivers for the SATA megaRAID are available in the Linux kernel by default. Beside open source drivers, LSI Logic provides driver packages for Red Hat and SuSE Linux. Also, the MegaRAID SATA 150-4 and 150-6 are the only cards in this roundup to have Netware support.

Prices of the MegaRAID 150-4 and 150-6 are ¤ 240 and ¤ 320, respectively. This is an honest pricing scheme for a card based on an out-of-date hardware design, but with an enterprise level feature set.