Because of its simplicity and short test duration, the ATTO Disk Benchmark is used a lot for comparing the 'peformance' of hard disks. The tool measures the sequential transfer rate of a partition using a test length of 32MB at most. Because of this small dataset, ATTO is unsuitable for measuring media transfer rates of intelligent RAID-adapters which are equipped with cache memory. The smart RAID adapters will serve the requested data directly from their cache, as a result of which the results have no relationship to the media transfer rates of these cards. For this reason ATTO is an ideal tool to test the cache transfer rates of intelligent RAID-adapters.

Not all adapters are able to fool ATTO. In some cases the results in the graphs shown below are related to the cache transfer rate of some of the adapters, in other cases they reflect the media transfer rates of the adapters. When results are cached, it is recognisable by a transfer rate that remains the same irrespective of the RAID configuration. ATTO-tests were carried out on empty NTFS-partitions with ATTO set to its standard queue-depth of 4 I/Os, a test length of 32MB and transfer blocks ranging from 512 bytes to 1MB. As the result of this test, the highest read and write transfer rate over all transer blocks was picked. Generally the highest throughput is reached at transfer blocks of 256KB or 512KB. 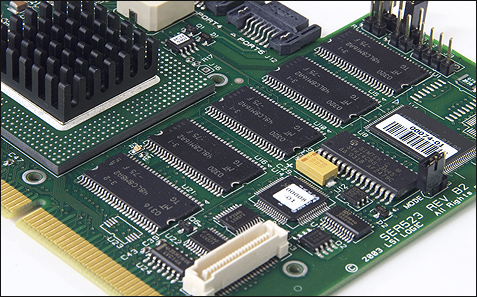 The results of the Areca ARC-1120 in the RAID 0 tests cleary show this adapter does not have any trouble with ATTO's tiny dataset. Floating high above the crowd, the ARC-1120 has a perfect view on the struggles of the other adapters. Exceeding 750MB/s, the transfer rates from the Areca ARC-1120 are almost equal to the effective bandwidth of the 133MHz PCI-X bus. A bit less rapid, but still impressive, are the write transfer rates of 450MB/s. Although it is not clear when looking at the results, also the LSI MegaRAID SATA 150-4/6 uses caching. The older architecture of this adapter doesn't allow higher throughputs then 145MB/s. It's highest write transfer rate of 125MB/s is not impressive. The MegaRAID SATA 150-4/6 cannot take much advantage from its cache. Most other adapters obtain higher media transfer rates in configurations with more than two disks then the MegaRAID cache is able to perform. The difference between a transfer from cache over a transfer from disk is of course, the much lower latency of cache transfers.

The RAIDCore BC4852 is the only card that, amongst the non-caching participants, reaches decent transfer rates in RAID 0 configuration with four disks. The queue size of 4 I/O creates problems with some cards. In tests with a queue size of 1 I/O the 3ware Escalade 9500S-8 showed healthy scaling transfers rates. We left the queue size at 4 because this is the standard setting for ATTO with which most people perform the test. Nevertheless, it is disappointing that the Escalade 9500S-8 is not capable of exploiting the benefits of onboard cache in the ATTO Disk Benchmark. 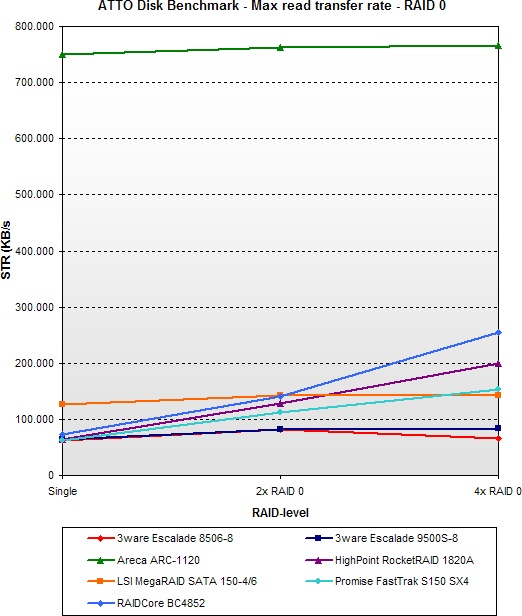 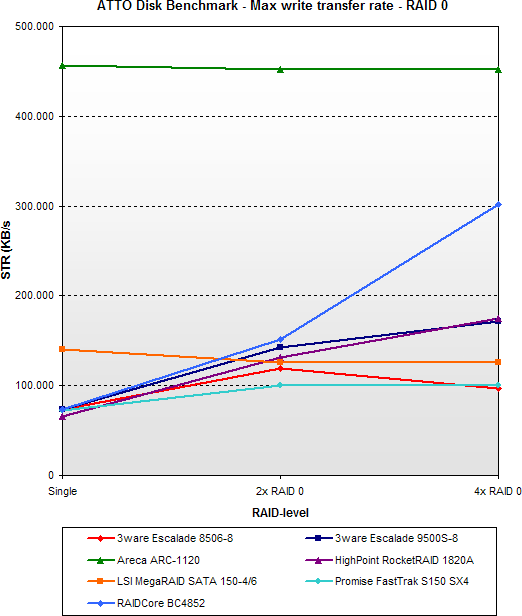 The use of caching is more visible on the LSI MegaRAID SATA 150-4/6 in RAID 1 and RAID 10. Thanks to the cache memory, the transfer rate of the MegaRAID in RAID 1 is nearly double the performance of non-caching adapters. The results of the RAIDCore BC4852 in RAID 10 are nearly equal to the ideal (media) transfer rate. Furthermore one notices that the write transfer rates of the 3ware Escalade 9500S-8 are rather good in RAID 10, whereas read transfer rates are disappointing. The Escalade 8506-8 has the same problem but also performs worse in the write test. 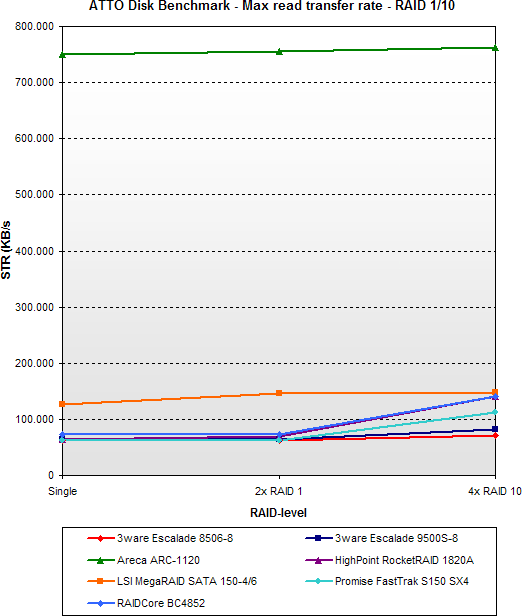 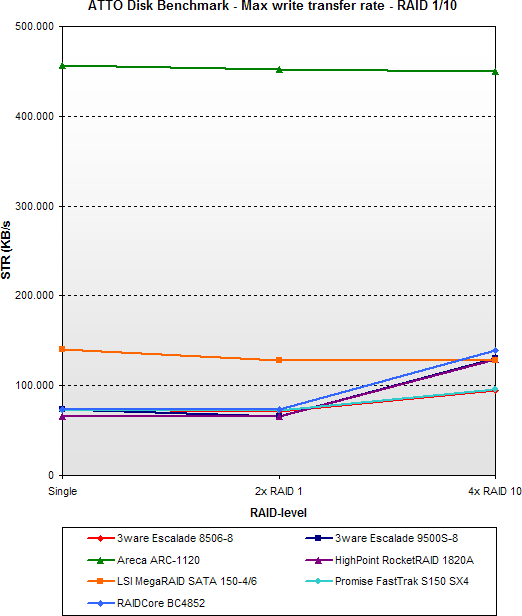 In the RAID 5 tests the RAIDCore BC4852 and the HighPoint RocketRAID 1820A once again show good performance scaling. Both do not succeed in reaching the level of the Areca ARC-1120, however. The Escalade 9500S-8 can't cope with sequential transfer rates at a queue size of 4 I/O's, resulting in disappointing performance in the read test. Even the older Escalade 8506-8 is faster in this benchmark. In the write test the roles are reversed. The Escalade 8506-8 has a less powerful I/O processor than its successor and as a result its performance line dangles at the bottom of the graph. Despite a certain improvement over its predecessor, no great stories can be told about the write transfer rate of the Escalade 9500S-9. The differences compared to the RAIDCore BC4852 and the HighPoint RocketRAID 1820A are enormous. 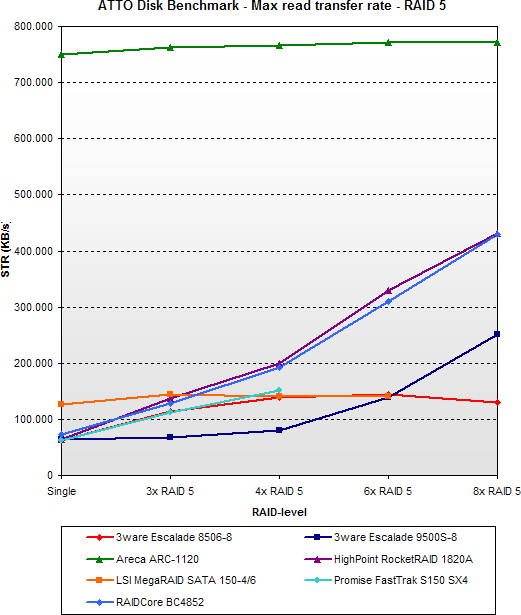 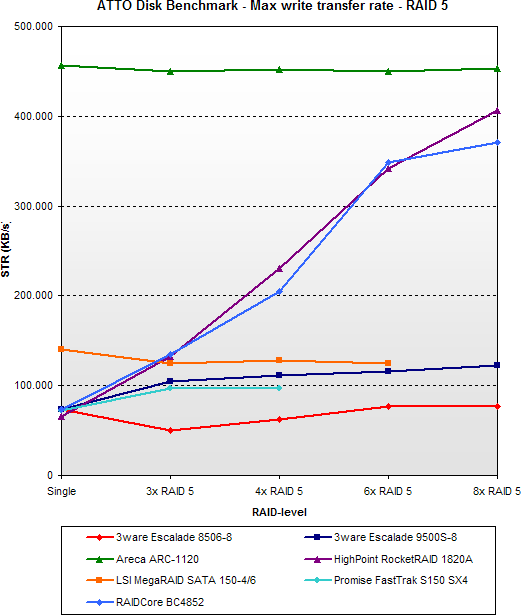