Fetch upload streaming lets web developers make a fetch with a ReadableStream body. Starting in Chrome 85, it's available for an origin trial.

Previously, you could only start a request once you had the whole body ready to go. But now, you can start sending data while you're still generating the content, improving performance and memory usage.

For example, an online form could initiate a fetch as soon as a user focuses a text input field. By the time the user clicks enter, fetch() headers would already have been sent. This feature also allows you to send content as it's generated on the client, such as audio and video. For more information, see Streaming requests with the fetch API.

See the Origin Trials section for information on signing up and for a list of other origin trials starting in this release. This origin trial is expected to run through Chrome 87 in January 2021.

Note: At the time this was originally published, WebHID was scheduled to begin an origin trial in Chrome 85. The timeline has since been pushed back to Chrome 86.

There is a long tail of human interface devices (HIDs) that are too new, too old, or too uncommon to be accessible by systems' device drivers. The WebHID API solves this by providing a way to implement device-specific logic in JavaScript.

An HID is one that takes input from or provides output to humans. Examples of devices include keyboards, pointing devices (mice, touchscreens, etc.), and gamepads.

The inability to access uncommon or unusual HID devices is particularly painful when it comes to gamepad support. Gamepad inputs and outputs are not well standardized and web browsers often require custom logic for specific devices. This is unsustainable and results in poor support for the long tail of older and uncommon devices.

We're working on an article to show you how to use the new API. In the meantime, we've found some demos from a few eager engineers that you can use to try the new API. To see those demos, check out Human interface devices on the web: a few quick examples.

See the Origin Trials section for information on signing up and for a list of other origin trials starting in this release. This origin trial is expected to run through Chrome 87 in January 2021.

The navigator.getInstalledRelatedApps() method determines whether a site's corresponding native app is installed. This allows customization of a user experience for already-installed apps. For example, users can be redirected from a product marketing page directly into an app. Functionality can be centralized to prevent users from seeing duplicate notifications and save developers from maintaining two code bases. Sites can even avoid prompting for installation of a PWA if a native app is already on a user's device.

It does all this while protecting user privacy. Entries in the web app manifest and the Android manifest file ensure that sites cannot use the API to request arbitrary information about users' installed apps.

This method was implemented on Android in Chrome 80. Starting in Chrome 85, it's available on Microsoft Windows. This addition is the result of work from Microsoft. For details on using this method, see Is your app installed? getInstalledRelatedApps() will tell you!.

CSS Houdini is a set of APIs and CSS features that exposes the CSS rendering engine. It lets developers create new CSS features without waiting for a native implementation in browsers. CSS Houdini's @property rule is part of the CSS Properties and Values API, which allows defining custom properties with inheritance, type checking, and default values. The first part of this API, CSS.registerProperty(), was implemented in Chrome 78. That method's capabilities are now available in stylesheets through the @property.

Take the image below, for example. What you're seeing is a transition created with a CSS custom property. In addition to being impossible without the new API, this transition is also type safe. For more information, see @property: giving superpowers to CSS variables.

A declarative API to allow the creation of shadow roots using only HTML and no JavaScript. This API allows Web Components that use Shadow DOM to also make use of server-side rendering (SSR), to get rendered content on screen quickly without requiring JavaScript for shadow root attachment. The origin trial is expected to run through Chrome 87 in January 2020.

The RTCRtpEncodingParameters.adaptivePtime property lets a sender in a real-time communication (RTC) system enable or disable adaptive packet rates. Because the packet rate is a big determining factor to the overall bitrate of an audio stream, an optimal congestion control is needed to adapt the packet rate. The audio packet rate is analogous to the video frame rate, which also plays an important role in the video bitrate adaptation.

Although adaptive packet rate may be ubiquitously beneficial, we need this API for applications to enable and disable it, since, otherwise, it may introduce interoperability problems. Some implementations have taken a fixed packet rate as an assumption, and thus may fail or perform sub-optimally with an adaptive packet rate. The origin trial is expected to run through Chrome 87 in January 2021.

Portals enable seamless navigations between sites or pages by allowing a page to show another page as an inset. For more information, see Hands-on with Portals: seamless navigation on the Web. The origin trial is expected to run through Chrome 86 in early November.

Other Features in this Release App Shortcuts

App shortcuts are now available on desktop in addition to Android, which debuted in Chrome 84. This feature improves users' productivity and facilitates reengagement with key tasks by providing quick access to common actions. For sites that are already Progressive Web Apps, creating shortcuts requires only adding items to the web app manifest. This addition is the result of work from Microsoft. For more information, see Get things done quickly with app shortcuts.

Chrome is now auto-upgrading images served over HTTP from HTTPS sites by rewriting URLs to HTTPS without falling back to HTTP when secure content is not available. Chrome has been auto-upgrading audio and video content since version 80.

Adds support for decoding AVIF content natively using existing AV1 decoders. AVIF is a next generation image format standardized by the Alliance for Open Media. There are three primary motivations for supporting AVIF:

CSS Color Adjust: Remove 'only' and Support 'dark' or 'light' for color-scheme”

Chrome made two changes to match those made in the CSS Color Adjustment level 1 spec.

This means content which has a dark theme in its CSS will be able to match it with dark themed UA controls.

This change improves interoperability with WebKit which already had this behavior for 'color-scheme: dark'.

(Desktop only) The leavepictureinpicture event now exposes a reference to pictureInPictureWindow so that web developers no longer need to keep a global reference to that object.

Support is added for several CSS properties and descriptors for printing.

Web developers may specify a referrer policy on their documents, which impacts the Referer header sent on outgoing requests and navigations. When no such policy is specified, Chrome will now use strict-origin-when-cross-origin as the default policy, instead of no-referrer-when-downgrade. On cross-origin requests made from documents without a specified referrer policy, this reduces the Referer header to the initiating origin.

Changes the behavior of fallback content for ImageInputType and HTMLImageElement. Such content will now render exactly the same as alt text would.

Update the Behavior of the "disabled" Attribute for HTMLLinkElement

These behaviors are eliminated in compliance with a spec update.

The new APIs also do not depend on the GATT characteristic properties being set correctly which allows working around buggy Bluetooth devices.

Several methods from the Web Authentication Level 2 spec have been added.

This version of Chrome incorporates version 8.1 of the V8 JavaScript engine. It specifically includes the changes listed below. You can find a complete list of recent features in the V8 release notes.

Adds two new JavaScript features to V8. Promise.any() accepts an iterable of promises and returns a promise that is fulfilled by the first given promise to be fulfilled, or rejected with an AggregateError holding the rejection reasons if all of the given promises are rejected. AggregateError is a support class that aggregates one or more errors into a single object.
This rounds out standard JS support for commonly available Promise combinators already available in userland libraries.

JavaScript now has support for global substring replacement through the new String.prototype.replaceAll() method.

Chrome 85 starts a spec-mandated turn down of AppCache in Chrome. For details and instructions for managing the transition gracefully, see Preparing for AppCache removal. For information on a feature that will help you identify uses of this and other deprecated APIs, see Know your code health.

Use of cookies with SameSite set to None without the Secure attribute is no longer supported.
Any cookie that requests SameSite=None but is not marked Secure will be rejected. This feature started rolling out to users of Stable Chrome on July 14, 2020. See SameSite Updates for a full timeline and details. Cookies delivered over plaintext channels may be cataloged or modified by network attackers. Requiring secure transport for cookies intended for cross-site usage reduces this risk. 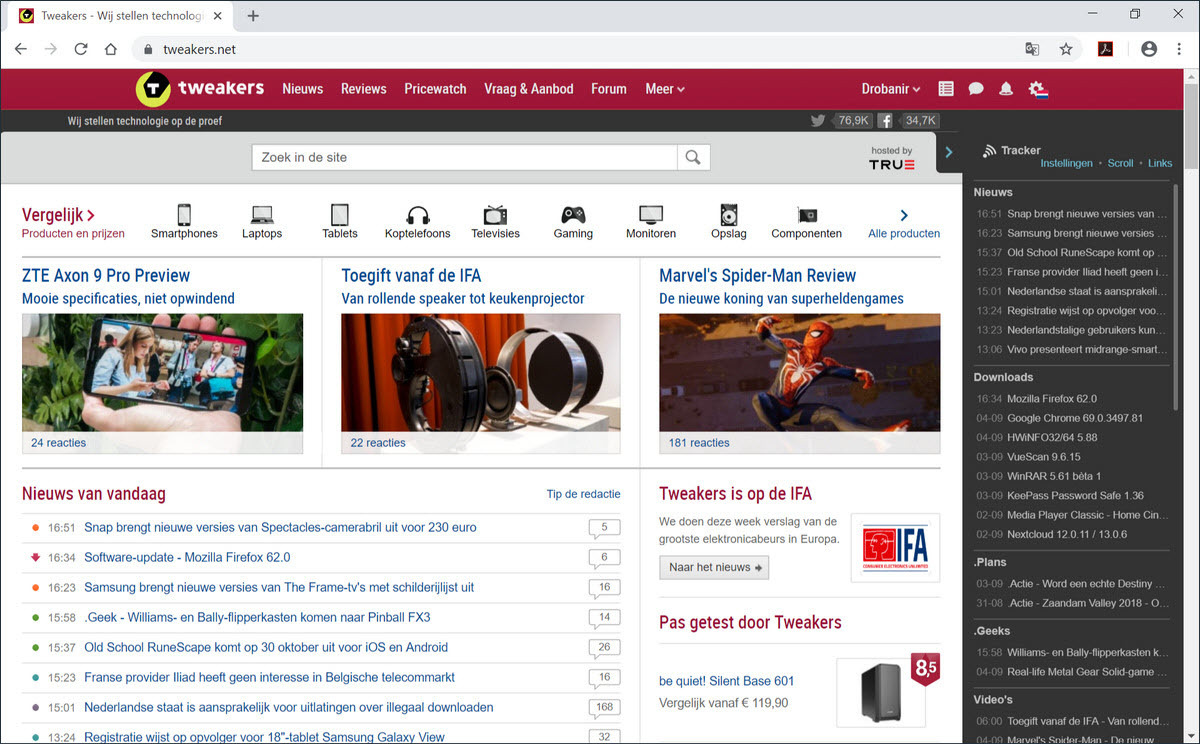