On April 18 2005, Intel was the first to come with an x86 dualcore processor. Today, a little more than eighteen months later, the next step is here in the form of the Core 2 Extreme QX6700 (codename Kentsfield): the first quadcore x86. As the name implies, the new 'Extreme' has some impressive specs: a clock speed of 2.66GHz, 2x 4MB of L2 cache, and – on a slightly less positive note – a 130Watt TDP. Tweakers.net received a test sample from Intel, and in this article we take a first look at the new addition to Intel's line-up.

If Intel is to be believed, Kentsfield is fully compatible with the current line-up of Core 2 Duo motherboards. In certain cases a BIOS update is needed for the CPU to be recognised correctly, but it uses the same socket (LGA775) and the same 1066MHz bus. Although it consumes more energy than the dualcores, this does not exceed the maximum specifications – after all, 130Watt is needed to power the old Pentium D. Internally, Kentsfield consists of two Core 2 Duo E6700 'Conroe' chips. This design choice has been the subject of heated debates: especially AMD likes to remind us that gluing together two separate chips does not constitute a quadcore proper. It is certainly true that this choice has its downfalls: the one pair of cores can only communicate with the other via the bus, which limits the available memory bandwidth. Moreover, there is no shared cache, meaning that data can be stored twice, limiting the effectiveness of the total memory capacity of 8MB. For this reason, several benchmarks will do better on a single chip quadcore than on an MPM (multi-processor module) consisting of two dualcores.

But not everything about this design is negative: to make a Kentsfield, it suffices to pluck a small percentage of dualcores from the production line and package them in a different way. This is a much faster process than building a separate quadcore production line. Moreover, the yields will be greater: a greater square makes the round wafer surface harder to fill, and consequently a larger portion of the disc will be lost in case of an error. Half a broken MPM quadcore can still be sold as a dualcore, but the term yield has more subtleties in practice than merely 'perfect' and 'trash'. Statistics, too, has a say in how the line-up will end up looking: In case ten percent of quadcores achieve the desired TDP, production will need to be increased tenfold compared to the perfect world scenario. By also selling versions with a lower clock value, things can be optimized, but it is less risky to aim high if there are stocks of millions of Meroms, Conroes, and Woodcrests to choose from.

According to internal research at Intel, the two dualcore approach makes for 20% higher yields and 10% less costs. The company has worked out that a single chip quadcore would cost $79,85 to make, against $71,10 for an MPM solution. Incidentally, such prices are - by far - not for the consumer: Intel will still happily asks a thousand dollars for a Core 2 Extreme QX6700. But the consumer's advantage is that Intel's quadcores will soon be available, and not in half a year's time as is the case with AMD. By the time that company ships its first quadcore, Intel expects to have sold a million of them for use in desktops and servers. 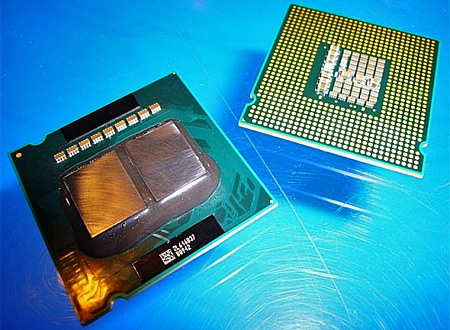