We have seen that the Sun's UltraSparc T1 – provided it is loaded with the right software – is able to scale well. This is a nice fact for demonstrating the underlying philosophy, but without comparisons it does not say an awful lot about the processor's potential. Are 32 slow threads quick enough to beat two or four fast cores? To answer that question, we ordered an X4200, with two 2,4GHz dualcore Opterons, beside the T2000. In order to take the operating system out of the equation, we installed Solaris 10 on the X4200 as well. A difference was that the Opteron 'only' had 8GB of memory (compared to the 16GB in the T2000), but as indicated before, everything above 4GB has little influence on the performance in this benchmark.

It is immediately clear that the Opteron not only performs clearly better than the UltraSparc T1, but also that it reaches its peak sooner. The X4200 is at full steam from about ten simultaneous users, while the T2000 does not reach its full potential until about forty of them hook up. When we scale things down, the two Opteron cores have little difficulty beating the four Niagara cores. We have confirmed this both by switching off a single core in both Opterons, and by turning off one of the processors completely. The difference in performance was minimal in both cases. 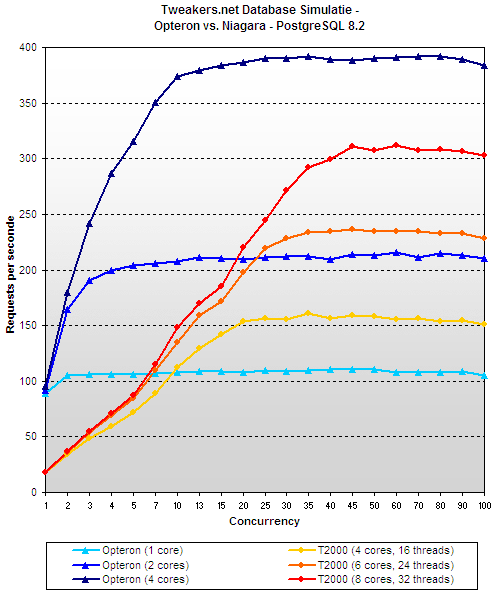 In MySQL, this picture crops up again, with the exception that things look worse for the T2000 because of the poor scaling behaviour. Remarkably enough the Opteron's performance does not collapse under heavy loads, although it doesn't get better after a certain point. In any case, in MySQL the two Opteron cores beat the eight Niagara cores in all cases. The disappointing impression left by MySQL hardly makes a good case for the philosophy of simplifying cores in order to stick as many as possible on a chip. Having said that, there's people out there who have had success in their efforts and have made MySQL fly on the UltraSparc T1, but apparently our load patterns are not suited to it. 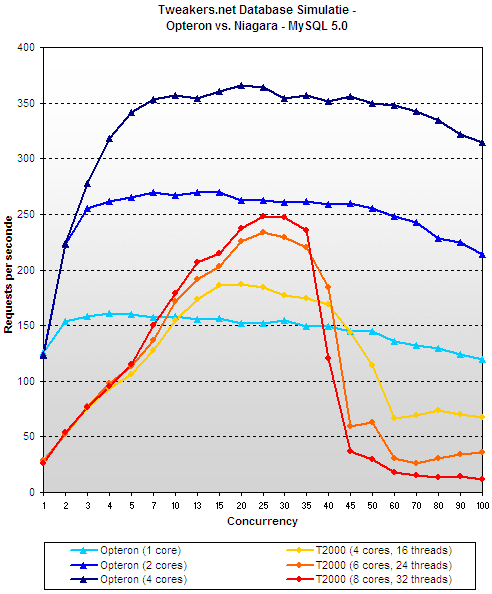