AMD's Opteron has remained loyal to Socket 940 since its introduction in April 2003, but all good things must come to an end some time. A new series of processors will soon appear which will work with a new socket, dubbed Socket F. There are a number of different reasons behind this transition, and some of them will only become clear in the future. For the user, the most tangible difference is the support for DDR2 memory. Even though DDR2 offers up to double the bandwidth of regular DDR, tests regarding desktop usage have shown that the increase in performance is small or even negative. In this article, we will take a look at the effect of this new memory type in our database test.

Socket F is no traditional socket but a so-called Land Grid Array (LGA). This means that there are no pins on the processor, but only small pits. These make contact with the slightly springy landing-points on the mainboard. This approach gives multiple advantages, such as a higher contact point density and better electrical properties. In total, Socket F has 1207 lands, but their individual functions have not been fully unraveled yet. Rumors trying to explain the extra positions include that there is space for an integrated PCI Express controller and a fourth HyperTransport link. Furthermore, support for FB-DIMM is supposed to be possible. Socket F should also be prepared for the electric current demand of quad cores. 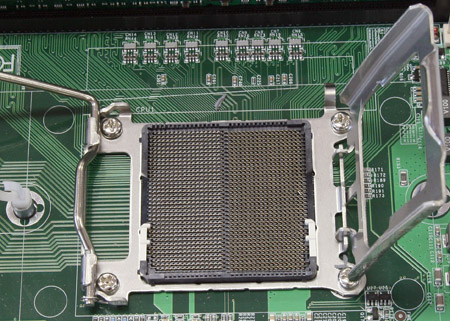 Looking at the photo of the socket, it is obvious the mechanism to mount the cooler has changed. AMD has designed a metal construction including a cover to make sure that the cooler can be attached firmly without running the risk of damaging the processor and, more importantly, the underlying lands. These lands are clearly divided in two halves, yet the reason for this is unknown to us. AMD did announce that it wants to work with different power planes, allowing specific parts of the processor to get an independant supply, but a physical division of lands is unnecessary for that purpose. The two lands are not completely the same: the right land (on this picture) has 18 rows of pins, the left one has only 17 rows.

The Socket F Opteron will be recognizable by the new model numbering with four digits. Also Socket F chips will be at least dual core, so single core processors won't be found in the assortment. According to rumor, the new numbering scheme will look like this: