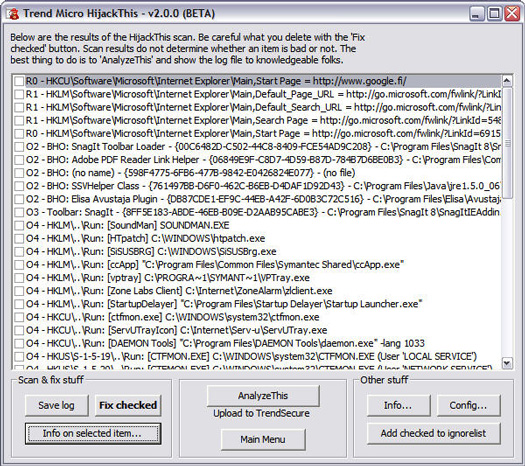 My antivirus is detecting a virus/trojan/worm in HijackThis!

If you are using McAfee VirusScan, it's possible it detects W32/Generic.Worm!p2p, which is a generic detection for worm viruses that spread over file sharing networks such as Kazaa. This is a false detection.
Unfortunately, the UPX compression I use in all my programs is frequently detected by McAfee as this particular virus type. This compression method in itself is harmless, but since a lot of viruses also use this compression, it is frequently associated with viruses just because of that.
In the past few years, McAfee has detected HijackThis as this generic worm a total of four times, as well as detecting StartupList once. I have emailed them four times asking for a permanent fix, instead of updating the antivirus DAT files to fix one false detection each time. Since they seem not to be doing this, almost every new version of HijackThis is detected as this generic worm as soon as it comes out. I am tired of telling them to fix this, but I urge anyone with this problem to complain to them about it using any of the options listed on the McAfee contact page.