When we managed to get our hands on a server with two Intel Xeon 'Woodcrest' processors for the first time, we were very impressed with its performance. Not only did this lead to an extensive review, but it was also the main reason to select these chips for the configuration of Apollo 5, the database server of our forum Gathering of Tweakers (GoT). This machine is now operational, but naturally it was subjected to severe testing before entering the server room in Amsterdam. In this review, we give the results of our benchmarks.

Apollo 5 is a Dell PowerEdge 1950, somewhat different from the Fujitsu-Siemens RX300 S3 which we examined earlier. The two brands differ in terms of design and price as well as in the possibilities for upgrading, management and service. Since both machines use the same chipset, there is no reason to assume that the brand will play a significant role in this specific test. For other types of workload this might be different, especially when more I/O is involved, but we shall nevertheless assume that it is negligible. Of course, there are other differences between the two servers to be examined, or we would not have very much to do in this review. We selected a more expensive version of the processor, more and faster memory and additionally, we installed another storage controller. A run-down of the differences:

On the basis of this table, no-one should be surprised that the new Apollo is even quicker than the system we examined earlier, so as far as speed is concerned this article will not contain any surprises. What we can do, however, is use the results obtained with Apollo 5 to draw more conclusions concerning the scalability of the Xeon as well as the effect of the latest Linux kernel, version 2.6.18. Additionally, we have examined the effect of hardware based prefetchers on the basis of AMD's Xeon benchmarks.

It is important to realize that our benchmark method is largely independent from I/O and amount of memory. As long as there is at least (a little more than) 4GB of memory plugged into the server, the hard disks are barely used. In the original article, the RX300 was tested with 6x 1GB and 2x 512MB (a total of 7GB), but this time we simply had 1x 8GB at our disposal. Testing things again was necessary anyway because of the new kernel version, but in fact the difference between 7GB, 8GB and 16GB is not noticeable in this benchmark (this is not exactly true for the production environment of our forum 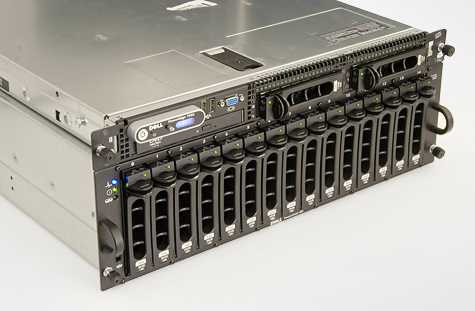