This gem measures 116mm by 52mm and is 18mm high. The keys themselves are 32mm squared and equipped with a built-in OLED screen, measuring 20mm on each side. These screens offer a resolution of 96 by 96 pixels, capable of displaying more than 65.000 different colors. Animated pictures are possible too at a framerate of three frames per second, while the maximum viewing angle is 160°.

But technical specifications only tell half the story. The displayed images are really a bit darker than expected. Besides, the images look a bit greenish, but this issue can be resolved by adjusting the color temperature. Even then, however, the quality of the images does not fully resemble the quality that's suggested by the packaging.

Even more irritating is the high frequency sound that comes from the Optimus Mini Three. This noise, somewhere between 10.000 and 15.000Hz, might be not noticeable when playing music, it nearly matches the sound used to deter youths from shopping malls, as they can hear the high frequencies that older people cannot. Although not everyone will agree on this, the real enthousiast won't be really bothered by this noise, but if his pet will share that opinion is rather questionable. In the meantime, people already confirmed that not only our testing keyboard is suffering from this sound, the problem also occurs with other Mini Three keyboards.

Just like a real tweaker is supposed to, we want to know what's inside. After carefully removing the bottom part, we discover the logic board that nearly fits the casing. The bottom side of this board is rather boring, but it gets interesting when we remove this logic board from its housing to investigate the construction minutely. Apart from the obligatory resistors and capacitors, we discover three big chips. In the centre of the board is a PIC18F8722 programmable microchip. This chip operates at a maximum clock rate of 40MHz and offers the programmer four serial ports, 128KB programmable memory and 3.8KB working memory. It looks like this ram isn't used, since the microchip is accompanied by an extra memory chip. We wouldn't be supprised to discover that this PIC18F8722 can be updated through the usb connection, which would open up some interesting possibilities for the electronics enthousiast. 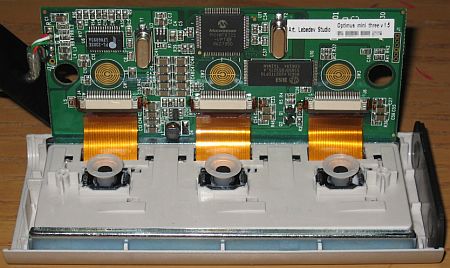